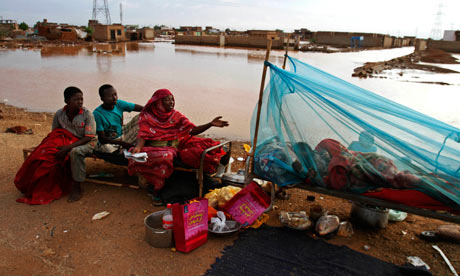 Sudan’s floods have left many families homeless, particularly in the region around Khartoum, the capital. Photograph: Abd Raouf/AP

Forty-eight people have been killed and more than 500,000 affected by the worst floods in Sudan in quarter of a century.

The region around the capital, Khartoum, was particularly badly hit, with at least 15,000 homes destroyed and thousands of others damaged. Across Sudan, at least 25,000 homes are no longer habitable. A UN official described the situation as a disaster.

One of the major health worries is the collapse of more than 53,000 latrines; the World Health Organisation (WHO) has warned of an increase in malaria cases in the past two weeks.

In South Sudan, recent fighting has forced 148,000 people in Pibor country – almost the entire population – to flee to the bush. Médecins Sans Frontières (MSF), the medical NGO, says about 90,000 people are missing. The 28,000 people who have been accounted for are in and around Gumuruk village, where MSF is running a clinic.

The organisation has provided up to 100 consultations a day to people with diseases contracted after spending weeks or months hiding in the bush during the rainy season.

MSF has expressed concern about the absence of men coming for treatment, apparently because they are frightened of seeking help where there is a military presence.

In May, clashes between the South Sudan Army and the David Yau Yau militia intensified in Pibor county, prompting a mass exodus. In July, further violence between the Lou Nuer ethnic group and the Murle, the majority group in the area, triggered a wave of panic. Last month’s attacks left 328 people dead, according to a Murle leader.

A woman who received treatment from MSF said her husband was too frightened to visit the clinic. “My husband does not dare enter the village as he is afraid he will be killed. If we run to the town the soldiers might kill us, and if we run to the bush the enemy tribe might kill us,” she said.

MSF is also worried about the impact of the fighting on food supplies. “People come to the village and sit all day waiting for food,” said Carolina Lopez, its emergency co-ordinator in Pibor county. “Most lost their cattle in the recent fighting, and this year’s planting season was plagued with violence, so they are extremely vulnerable. Too many of them turn and walk back through the rain to their temporary shelters in the evening, their bags empty.”

The UN military mission in South Sudan said this week it had increased its patrols in Pibor county to allow civilians to return to their towns and access food distribution points. Jonglei state has been plagued by ethnic violence between the Lou Nuer and the Murle, who have a history of animosity over grazing land, water sources and cattle raids that have often involved the abduction of women and children.