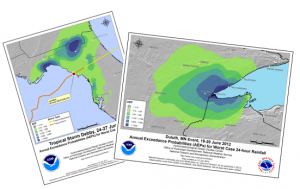 The massive floods in Louisiana that killed five people and made 20,000 homeless last week contained as much water as generally flows out of the Mississippi in three years. The National Oceanic and Atmospheric Administration in the USA will this week declare the floods as a one in five hundred year event. This is the eighth flood in the last fifteen months to fit that description. The National Weather Service has said that the levels of moisture in the air are at record levels, a direct result of a w