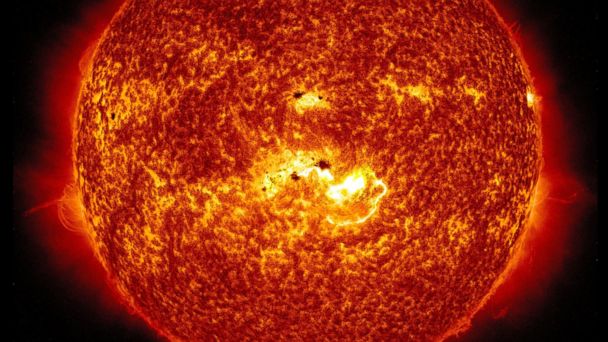 For the next 24 hours forecasters say a “strong” geomagnetic storm could cause navigation and communication problems for satellites, radio dropouts for ships and planes in polar regions, and might affect GPS navigation systems and satellite radio. Airlines are already avoiding polar routes to keep passengers and crew from elevated levels of radiation.

“It’s significant, but it’s not the mother of all storms,” said NOAA space scientist Joe Kunches. “The good news is that people with GPS in their cars probably won’t see much of an effect.”

Kunches says the aurora will also be seen further south than normal. You can check the map here: http://helios.swpc.noaa.gov/ovation/

Geomagnetic and solar radiation storms are rated like hurricanes, and the geomagnetic storm hitting now is considered an “S-3″, in the middle of the scale, with 5 being the most extreme.

Our planet isn’t out of the woods yet. The area of the Sun where this storm originated 48 hours ago will still be a threat for about another week until it rotates away from Earth, said Kunches.

Polar regions are especially affected. Kunches says that if this storm had occurred during last week’s rescue attempt of researchers stuck in ice near Antarctica, communications would have likely been severely impacted.