Scientists have reviewed almost two decades of satellite data to build a new map showing the trend in sea levels. Globally, the oceans are rising, but there have been major regional differences over the period.

A major reassessment of 18 years of satellite observations has provided a new, more detailed view of sea-level change around the world.

Incorporating the data from a number of spacecraft, the study re-affirms that ocean waters globally are rising by just over 3mm/yr.

But that figure, according to the reassessment, hides some very big regional differences – up and down.

The Philippine Sea, for example, has seen increases in excess of 10mm/yr. 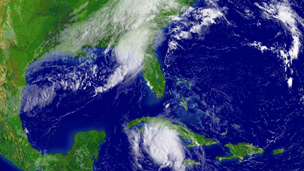 Part of that signal reflects the great fluctuation in winds and sea-surface temperature across the Pacific Ocean known as the El Nino/La Nina-Southern Oscillation.

“The trend map is really a way of looking at average field changes over the 20 years,” explained Steven Nerem of the University of Colorado, US.

“A lot of this is decadal variability that will average out over the longer time series, which is why we need more missions to understand where this variability is.”

Paolo Cipollini from the UK’s National Oceanography Centre added: “Many of the features in the trend map indicate changes in heat storage and correspond to long-term variations in the ocean currents.”

This is evident if you look for some of the well-established mass movements of water – such as the Gulf Stream arching across the North Atlantic from the eastern US, or the Kuroshio Extension reaching out from Japan into the Pacific.

Surface bounceThe map was unveiled in Venice, Italy, at a symposium marking “20 Years of Progress in Radar Altimetry“.

The research will help scientists to tease out the scale of the various contributions to long-term sea-level rise and understand better the annual and inter-annual changes that can occur.

Currently, the most significant contributions are identified as being the expansion of the world’s oceans due to their absorbing more heat, and the melt water coming from eroded glaciers and ice sheets.

A key quest is to identify to what extent sea-level rise may be accelerating and to pull out any long-term oscillations in ocean behaviour that could confuse that signal. 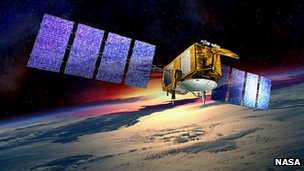 The study was completed as part of the Climate Change Initiative (CCI) agreed by European Space Agency (Esa) member states at their ministerial meeting in 2008.

The CCI seeks to deliver long-term observations on a large set of “essential climate variables” – sea-level change being one of the most important indicators of global change.

Routine observations began with Europe’s ERS-1 spacecraft in 1991, and this has subsequently been followed up by a series of international missions.

The benchmark today is arguably Jason/Poseidon – a cooperative venture between the US and Europe (principally France).

Now in its third incarnation, the Jason satellite circles the globe making a topographic map of 95% of the Earth’s ice-free oceans every 10 days.

To do this, it uses a radar altimeter, which constantly bounces microwave pulses off the sea surface.

By timing how long the signal takes to make the return trip, the instrument can determine sea-surface height.

But to get a full picture, Jason’s data needs to be tied into that from satellites which view parts of the world it cannot see, and also mapped on to tide gauge information. Although these coastal stations cannot provide the same global view as space-borne instruments, they capture much longer trends. Some gauge stations have unbroken records going back more than 200 years.

More detailAnother important tool introduced recently is the gravity satellite – specifically, the two US Grace spacecraft. This duo can weigh the amount of ice held in Antarctica and Greenland, and the quantity of water stored on the continents. They have provided new insights into the scale of melting at the poles, and the impact of changes in precipitation that can move huge volumes of water from the ocean to the land.

The spacecraft and its altimeter stopped operating without warning in April, underlining the need for several instruments to be maintained in orbit at the same time.

A replacement altimeter should launch on the Sentinel-3 spacecraft at the end of 2014. A continuity satellite for the present Jason is also expected to go up within months of the Sentinel.

Other types of altimeter are being built, as well. In December this year, France and India should launch their Saral platform. This will carry a high frequency (Ka band) altimeter that should capture better the changes occurring very close to coastlines – detail which is beyond the reach of microwave observations.

“The key challenge in the coming years is to ensure we keep acquiring altimetry data, that we are able to calibrate it and that we can ensure its quality,” said Maurice Borgeaud from Esa’s Earth Observation Science, Applications and Future Technologies Department.

“Also, we need to tackle the new domains of radar altimetry. Coastal altimetry has been mentioned – also what you can do to measure water levels in rivers and lakes. Again, the old generation of radar altimeters were not designed to do this; the latest generation will be.” 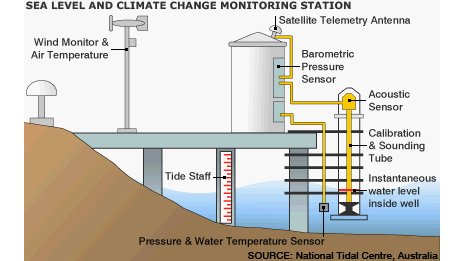 The modern tide gauge is now a highly sophisticated tool. Coastal instruments have recorded sea level change at some locations for more than 200 years

The BBC is not responsible for the conte