Right around Australia, individuals like you are stepping up to show Tony Abbott what a real direct action plan on climate change looks like.

Already hundreds of people have pledged to take on the fossil fuel industry this summer and beyond. Yesterday, we projected their images on to the heart of the industry lobby – the Minerals Council of Australia headquarters – to launch our Summer Heat campaign and to demonstrate the diverse and inspiring movement that is building to halt fossil fuel expansion in Australia. 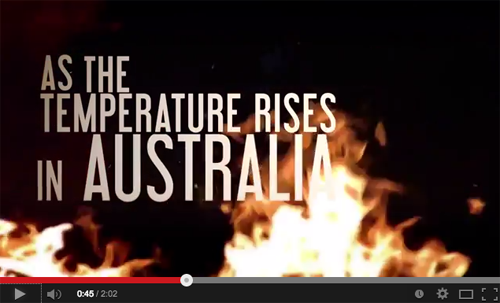 The fossil fuel industry plans to triple Australia’s coal and gas exports. Mines such as those proposed in the Galilee Basin and at Maules Creek will lead to more pollution, higher sea levels and more extreme weather events such as the recent bushfires in New South Wales and the typhoon in the Philippines.

That’s why, with the Abbott Government failing to lead, we’ll be taking our own direct action. As the temperature rises over Summer, people from communities right across Australia will be stepping up campaigns to target the industry and their radical plans.

We aren’t a movement of radical activists. We are mothers and fathers, grandparents, church leaders, lawyers, teachers, nurses and students. We are a community standing up to a radical industry that is trashing our future.

Join the movement today and let’s get going with our summer of real direct action! There’s already plenty of actions registered, and there’s more on the way – sign up and we’ll keep you posted!

Josh, Charlie, Aaron, Blair and Simon, and the rest of the Summer Heat team

P.S. Check out our blog about the launch and this message of support from

Felix Riebl of the Cat Empire