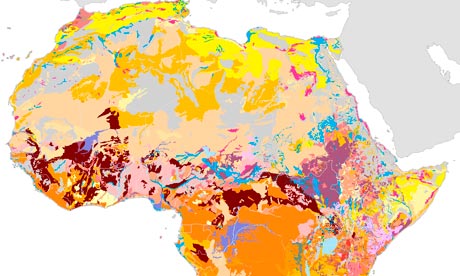 A team of international experts has drawn up the Soil Atlas of Africa – the first such book mapping this key natural resource – to help farmers, land managers and policymakers understand the diversity and importance of soil, and the need to manage it through sustainable use.

They say that despite soil’s importance, most people in Africa lack knowledge about it, partly because information tends to be confined to academic publications read only by scientists.

“There was an existing database on soil that had not been updated by soil science experts from Africa, so we asked them to provide us with new information, which we translated into a form understandable to key stakeholders,” said Arwyn Jones, a member of the soil team at the land resource management unit of the European commission’s joint research centre, which produced the atlas.

The project began four years ago, and involved experts from the European commission, the African Union (AU) and the UN Food and Agriculture Organisation. The atlas was released at the meeting of the AU and EU commissions in Addis Ababa last month.

Robert Zougmoré, regional programme manager for west Africa at the Cgiar research programme on climate change, agriculture and food security, says the atlas displays the diversity of African soil for both agricultural and non-agricultural purposes.

“We documented all the different types of soils and mapped them so that our decision-makers at national and regional levels can use the maps to decide where to invest in terms of food production and urbanisation,” he says. “Using the atlas, we can identify regions such as central Africa, some parts of west Africa, and southern Africa where a type of fertile soil called vertisol – which maximises crop yields – can be found in greater quantities.”

Zougmoré tells SciDev.Net that most African countries have national soil bureaus that are inadequately resourced, making it difficult to generate new soil information. He is now calling for more support from African governments.

Peter Okoth, a Nairobi-based natural resources consultant, says: “Regional users [of the atlas] have the opportunity to know about trends, problem hotspots and patterns of soil distribution”. But he cautions that unless users are properly trained, they may find using the atlas challenging.

Pedro Sanchez, project director of the Africa Soil Information Service (Afsis), and a soil expert at the US-based Earth Institute at Columbia University, welcomes the atlas as an “important tool”. But he points out that because the atlas is not interactive, users may find it difficult to determine relationships between soil properties and their impacts.

“We are also working on another interactive, web-accessible digital soil map that covers all the non-desert areas of Sub-Saharan Africa,” says Sanchez, adding that Afsis hopes to complete this project by the end of the year.

• Download the Soil Atlas of Africa (part one, part two, part three). The atlas is also available as a printed copy from the EU’s publication office.