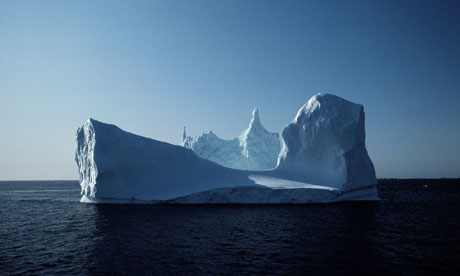 The release of a giant methane pulse from thawing Arctic permafrost could destabilise the climate system and trigger huge costs to the global economy within coming decades, warns a forthcoming paper in the journal Nature.

The paper highlights the link between the “unprecedented rate” of melting of Arctic sea ice, and the intensifying methane emissions from thawing offshore permafrost. The East Siberian Arctic Shelf (ESAS) alone carries a 50 Gigatonne (Gt) reservoir of methane gas hydrates which could be released slowly over 50 years or “catastrophically fast” in a matter of decades under the current pace of global warming.

The increasing release of methane coupled with the loss of Arctic sea ice would create an amplifying feedback “speeding up sea-ice retreat, reducing the reflection of solar energy and hastening sea-level rise as the Greenland ice sheet melt accelerates.” Recent research on ‘Arctic amplification’ has demonstrated a complex relationship between the earth system and the Arctic. The accelerating melt process is already altering the jet stream which seems to be multiplying and accentuating extreme weather events.

As I wrote in May:

“Extreme weather events over the last few years apparently driven by the accelerating Arctic melt process – including unprecedented heatwaves and droughts in the US and Russia, along with snowstorms and cold weather in northern Europe – have undermined harvests, dramatically impacting global food production and contributing to civil unrest.”

The authors of the Nature article, modelling the potential consequences of the 50 Gt East Siberian methane release over different time periods, conclude that it “will bring forward by 15–35 years the date at which the global mean temperature rise exceeds 2C above pre-industrial levels” – the ‘safe limit’ accepted by policymakers (though its safety has been disputed by leading scientists).

Under a business as usual scenario, this will generate an “extra $60 trillion (net present value) of mean climate change impacts” – nearly the same value as the entire GDP of the global economy. The lower emissions scenario (which unfortunately looks far less plausible at the moment) would “be an extra $37 trillion” – still over half of world GDP.

They point out that 80% of climate change impacts will hit poorer, less developed countries through “inundation of low-lying areas, extreme heat stress, droughts and storms”, all of which will be “magnified by the extra methane emissions.” But they also emphasise that their analysis only focuses on potential impacts from “one feedback” involving methane release from the ESAS, and is therefore probably “conservative” – implying actual costs could be much higher. They warn of an urgent need to:

“… re-direct economic attention from short-term economic gains from shipping and extraction to what appears to be an economic time-bomb… The costs of Arctic change carry significant – yet thus far invisible – risks to our global economic foundations.”

The authors urge the World Economic Forum, the International Monetary Fund, and other financial institutions to embark on new research accounting for such dramatic costs of Arctic climate change, which so far have been insufficiently recognised.

Current models do not incorporate amplifying feedbacks such as “linking the extent of Arctic ice to increases in Arctic mean temperature, global sea level rise and ocean acidification”; nor do they include critical “feedback loops”, such as “the effects of black carbon deposits from forest and agricultural fires, diesel use and industrial activity on snow and ice reflectivity and melting”, as well as links between Arctic sea ice extent, global sea level rise, increased shipping and the increase in Arctic local temperatures. Without analysing these factors, “world leaders and economists will continue to miss the big picture.”

The extent to which the majority of climate models have underplayed the scale of the challenge in the Arctic is evident from a new paper in Proceedings of the National Academy of Sciences (PNAS) which projects that the Arctic will be ice free in September by around 2054-58. The projection departs significantly, however, from actual empirical observations of the rapid loss of Arctic summer sea ice which is heading for disappearance within three years according to Nature co-author and renowned sea ice expert Prof Wadhams.

NASA airborne surveillance in the Arctic has already encountered large “plumes of methane” as much as 150 kilometres wide. While no one knows for sure how and when a significant methane release might occur, recent evidence shows that once the Arctic summer sea ice disappears the chances of breaching a tipping point in methane release from melting permafrost are far higher.

New research led by Dr Anton Vaks of Oxford University reconstructing the history of Siberian permafrost shows that continuous melting sufficient to release significant quantities of methane would begin at around 1.5C, a temperature rise to which the world is already committed early this century.

Underscoring the urgency of mitigation efforts, the Nature paper warns that it would be:

“… difficult, perhaps impossible, to avoid large methane releases in the East Siberian Sea without significant reductions in global emissions of CO2, since it is seabed warming, a product of summer sea ice retreat, which directly drives the methane release.”

If Prof Wadhams is correct in his forecast that the summer sea ice will be gone by 2016, then we could be closer to the tipping point than we realise.