Are you ready to embrace the apocalypse?

Are you ready to embrace the apocalypse?

Facing up to the slow collapse of our planet is hard, but thinking apocalyptically could help us prepare for the crises to come 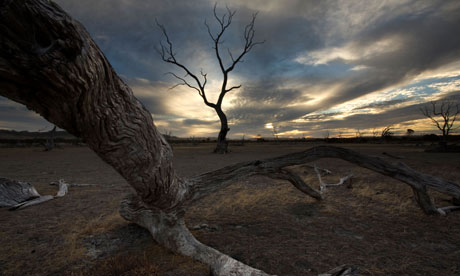 ‘How we live now is going to determine how well we’ll do when the great factories of Guangdong fall fallow.’ Photograph: Jason Roberts/Alamy

This weekend the Sustainability Centre in Hampshire will be home to Uncivilisation 2013, which describes itself as “a gathering of people searching for answers to questions about our collective future in a rapidly changing and depleting world”. At Uncivilisation about 400 people are expected to attend sessions including a wild-food foraging workshop, a talk on moving beyond a monetary-based economy, and a ceremony of singers and storytellers leading the group in a “liturgy of loss”.

I’ve been thinking a lot about the future lately. I’ve got two daughters. The youngest turned two this spring, an occasion that gave me the opportunity to carve out the mental space to start a new writing project and reflect on what the world is going to look like in 40 years, when she’s my age. Most popular imaginings of the future veer to extremes: the future is going to be a hi-tech paradise of machine-human mindmeld; or it’s going to be an overpopulated disease-ridden desert of zombies and armed zones of privilege. The rhetoric around the future swirls endlessly but almost effortlessly gravitates to the hyperbolic of Hollywood and the hype of Silicon Valley.

But the more I look into how and why we think the way we do about the future, the more it has become clear to me that neither future scenario has been helping me find a way forward; I’m left still looking for a way to understand what comes next for a planet so obviously under severe stress it seems hardly histrionic to worry about what will be left for my daughters when they’re 40 and I’m on my way out.

The Uncivilisation festival is put on by Dark Mountain, a publishing venture founded in 2009 with an annual journal and ongoing blog. One of Dark Mountain’s primary sustainers is Paul Kingsnorth, a disillusioned former environmental journalist who has come to the conclusion that we are in an inexorable period of “slow collapse”. To Kingsnorth and his Dark Mountain followers the problems are intractable. There is no turning back, halting global warming, ending our lifestyle of rampant overconsumption and environmental destruction. The Dark Mountain goal, then, is to give a forum to voices willing to acknowledge that no matter how ardent we are about recycling and voting green, we will still be living in a time of disintegration, a time of ongoing loss.

Kingsnorth’s Dark Mountain reminded me of a short tract I had come across written by journalism professor and activist Robert Jensen. Jensen teaches at the University of Texas at Austin and recently self-published a manifesto called We Are All Apocalyptic Now. In it, he argues that “responsible intellectuals need to think apocalyptically”. For Jensen, thinkers and environmentalists need to reclaim the apocalypse from survivalists, religious fanatics and pop culture. As he writes: “Thinking apocalyptically can help us confront honestly the crises of our time and strategise constructively about possible responses.”

My take is a bit of a hybrid – part Kingsnorth’s Dark Mountain spirituality and part Jensen’s pragmatic acceptance. Kingsnorth wants to reclaim apocalypse, create a space for people to celebrate what they still have and lament what they have lost. After that, it’s up to them to decide how to go forward. Jensen believes we can and should do something to prepare for the coming collapse. For Jensen, how we live now is going to determine how well we’ll do when the great factories of Guangdong fall fallow. Jensen says people should “prepare for it on a local level”, rebuild communities as much as they can, put in place alternative systems of local governance, think about their food supply.

It’s hard to imagine people around the world rising up to embrace slow decay and the local apocalypse. Both men seem to sense that, and neither is claiming they are at the helm of any looming revolution. Dark Mountain’s slow decay is more like slow food – a metaphoric way to reconceptualise our lives. The reclaimed apocalypse of Robert Jensen is more like the buy local movement – incremental actions we can do that remind us of our inherent humanity more than they challenge the terms governing our lives. For both, that seems to be the goal: the retaining of our humanity during and, possibly even after, the collapse. For me, it’s a revelation and a relief. I can mourn the spectre of future and celebrate what I still can.