by Neville
1 September, 2013 Uncategorized0
1 of 31
( Abbott has already stated that he will privatise the ABC. WHAT DOES THAT
LEAVE US?  WE NEED INDEPENDENT MEDIA REPORTING-UNBIASED)

Murdoch’s media is using all its might to influence the Australian election, and unfortunately —  it’s working. His plan is a simple one: create credible newspapers, gain the trust of readers and then bombard them with propaganda that furthers his own agenda. It’s deceptive and it works — but we can make sure it backfires this election.

Since day one of the election Murdoch’s papers have launched a one-sided campaign, dangerously and intentionally blurring the lines between editorial and reporting content. Front-pages depicting the Prime Minister as a Nazi TV character have in essence turned the papers into Australia’s most widespread political advertisements. And with Murdoch companies owning 65% of all newspapers read in Australia his agenda has become the nation’s agenda.

But there’s a weakness in his plan — it only works so long as people trust his newspapers. Once people know they’re being manipulated by a billionaire it’ll break his spell and they’ll turn against him. We just need a way to get this message into every home in Australia — and a brilliant new ad from GetUp gives us that opportunity.

The ad has already been seen by thousands, loosening Murdoch’s grip, but together we can get it in front of hundreds of thousands more and break Murdoch’s spell. Watch the ad here, and donate to ensure every Australian has the opportunity to make up their own mind this election: 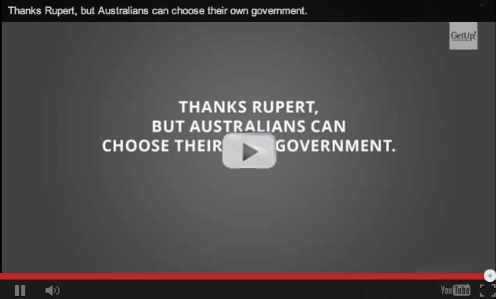 Murdoch papers have the ability to change the outcome of the election. In Brisbane, which has the most marginal seats in the entire country, his paper The Courier Mail is the only daily state-wide paper available. Together with his other mouthpieces he’s using it to push his own agenda knowing the voting public have few places to turn to hear a different point of view. Even the Australian Press Council, a body funded by the media that’s typically very timid, has been driven to speak out, saying “a paper’s editorial viewpoints and its advocacy of them must be kept separate from its news columns.”

News Corp papers have talented journalists doing great work, which Murdoch undermines every time his attack dog editors use his front pages as election pamphlets. His bullying is legendary — most who have tried to stand up to him have failed. But we’re a movement, not a politician dependent on his praise, which gives us a unique ability to fight back.

This ad by GetUp tells the story of his bias in an accessible way that connects with everyday Australians. It’s an ad that everyone needs to see if we’re going to defeat Murdoch’s plan to decide this election for us. Click to see the ad and donate now to help put it on the air and ensure we have a fairer media in general:

The Avaaz community has campaigned tirelessly for media reforms that will limit Murdoch’s power and restore a fair and honest media. We won a government media inquiry that was a crucial first step and helped provide the public support for brave politicians to speak out against Murdoch’s abuses. Now Murdoch is fighting back, but if we stick together and work hard we’ll see our papers to return to fearless journalism, not fear-mongering campaigning.

Oli, Ben, Emily, Ari, Moj and the rest of the Avaaz team.

Avaaz.org is a 25-million-person global campaign network that works to ensure that the views and values of the world’s people shape global decision-making. (“Avaaz” means “voice” or “song” in many languages.) Avaaz members live in every nation of the world; our team is spread across 18 countries on 6 continents and operates in 17 languages. Learn about some of Avaaz’s biggest campaigns here, or follow us on Facebook or Twitter.

You are getting this message because you signed “Save our dying planet!” on 2011-12-08 using the email address nevilleg729@gmail.com.
To ensure that Avaaz messages reach your inbox, please add avaaz@avaaz.org to your address book. To change your email address, language settings, or other personal information, contact us, or simply go here to unsubscribe.

To contact Avaaz, please do not reply to this email. Instead, write to us at www.avaaz.org/en/contact or call us