By Alister Doyle and Nina Chestney 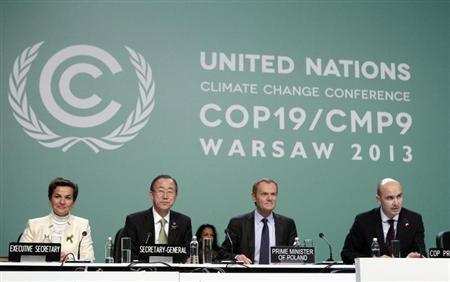 (Reuters) – People around the world are feeling the “wrath of a warming planet”, U.N. Secretary-General Ban Ki-moon said on Tuesday, urging almost 200 governments to take tougher action to reach a deal in 2015 on fighting global warming.

Ban told environment ministers at climate talks in Warsaw they had a steep climb ahead to agree to cut rising greenhouse gas emissions that scientists say fuel more extreme weather.

The Warsaw talks are struggling to lay the foundations for a new global accord, meant to be agreed in 2015 and enter into force from 2020, that looks likely to be a patchwork of pledges by national governments rather than a strong treaty.

Developing nations, led by China and India, insist that the rich must continue to lead while they focus on ending poverty.

“All around the world, people now face and fear the wrath of a warming planet,” Ban said, referring to extreme weather events such as Typhoon Haiyan that killed more than 3,900 people in the Philippines this month.

Current pledges for curbing global warming were “simply inadequate”, Ban said. “Here, too, we must set the bar higher.”

He said governments needed to step up aid to help poor nations slow their rising emissions of greenhouse gases and to adapt to the impacts of warming.

No major nations have set tougher national goals for cutting greenhouse gases in Warsaw. Japan disappointed many last week by saying it was watering down goals for 2020 after closing its nuclear industry after the 2011 Fukushima disaster.

A report by 49 experts in 10 nations on Tuesday said that carbon dioxide emissions from burning fossil fuels will rise to a record 36 billion tonnes (1 tonne = 1.102 metric tons) this year.

“I am deeply concerned that the scale of our actions is still insufficient to limit global temperature rise to below 2 degrees Celsius from pre-industrial levels,” he said.

Governments agreed the 2C ceiling in 2010 as a maximum permitted to prevent dangerous change. Temperatures have already risen by about 0.8 C (1.4F) from before the Industrial Revolution of the 18th century.

Ban said there were some signs of hope, pointing to actions by governments, business, cities and farmers to cut emissions.

Ban has invited world leaders to attend a summit at U.N. headquarters in New York on September 23, 2014. “I ask all who come to bring bold new announcements and action,” he said.

“The match is won by the team. In order to win, players have to collaborate,” he said, in a tent set up on what is usually the pitch in Warsaw’s main soccer stadium.