Battle of Bentley blockade goes to the tribe

The critical battle between protectors of the land and miners at Bentley in NSW has been won, by the protestors.

I sat down to write an early morning story exhorting all good humans (you) to come to the aid of the nation’s land and water at the Bentley Blockade next Monday. As the computer warmed up, news filtered through that the mining company’s license has been revoked by the NSW government.

You are off the hook. I no longer have to exhort you to choose between the comfort of your daily life and a cold, uncomfortable, non-violent battle three hours drive away.

The NSW government had organised hundreds of riot police, mounted units and the dog squad to face down thousands of farmers and environmentalists on a property in a small town in Northern NSW. The protesters have locked onto structures built at all access points to a farm that had sold mining rights to Metgasco.

Bentley is only one battle in the war between the short term view of the economy built around mining and the long term view built around land, water and renewable energy but it is close to the coast, close to Brisbane and is a test case for a relatively new NSW Government determined to emulate Queensland and declare itself open for business to coal.

The gas company was planning an exploration well to determine the viability of extracting gas from the limestone in form of extraction slightly different to the coal seam gas more familiar to Queenslanders but just as invasive to the artesian basis and surface activity such as farming.

The concern of the farmers is that miners are being given priority over water and land on which our food supply depends. In the words of the quickly-dumped NSW Premier Nathan Rees in June 2009, “Coal is more important to the people of NSW than food.” His logic was that we can make more money by selling coal than by selling food and so can then use that money to buy all the food we want. When challenged he failed to recognise any problem with that logic.

The concern of the environmentalists is that the focus on resource extraction, particularly the extraction of fossil fuels, takes us further down the dead end of building an unsustainable consumer economy that irrevocably damages the ecosystems that support us, including the water and land that the farmers want to protect.

The four thousand engaged locals who have been staffing the camp and supporting the “Simmos” locked onto the structures that deny the miners access to the property are supported by over 85% of the surrounding communities of Richmond Valley, Lismore, Ballina and Tweed Heads.

The local papers, shire councils, Greens party and groups like Lock the Gate, have consistently raised questions as to why the State Government is using taxpayer funded police and other resources to back mining companies in the face of such strong public opposition. The opponents include local plicemen, school principals and the famous Knitting Nannas.

The mining companies and representatives of NSW government departments responsible for mining and resources have begun recently to engage in the debate in detail, asserting that the wheels of industry and the gas stoves of Melbourne and Sydney will sputter to a cold, barren halt without alternative sources of gas.

It is true, the search for alternative forms of gas began around the mid nineties as Santos revealed that its Cooper Basin gas field that supplies NSW with its natural gas would run out by 2020. Instead of seeing this as an opportunity to activate and promote renewable sources of energy and build the long term future, governments backed the advocates of fossil fuel to follow the US down the track of exploring non-conventional gas and oil extraction.

While the public engagement in the details of the debate is new, it was not enough to convince an already engaged and alert public that they should sacrifice water and land for a secure energy future based on fossil fuels.

Plans for convoys of supporters from as far away as Brisbane made it evident that the hundreds of riot police already on their way to the towns of Lismore and Casino would face a very public battle that they would be unlikely to win and that would go all the way to a fully-fledged battle with well prepared, unarmed, non-violent demonstrators who have declared their preparedness to die if necessary.

At the same time, the investigations of the Independent Commission Against Commission have revealed that many decisions in favour of mining projects have been made by public officials seriously compromised by their acceptance of bribes from mining companies.

In the end, it appears to have been easier for the government to back out gracefully than fight its own citizens on behalf of a company that may have corruptly gained its support.

This victory for the tribe means I don’t need to challenge you as to whether you are willing to travel for three hours to go and support a small band of protestors on the front line. You should remain alert, however, as this is simply one battle in a global war.

At stake is the fundamental direction of society. Do we maintain the status quo and preserve our consumerist dream of 1.7 cars per family in an air-conditioned garage with a well stocked freezer or do we accept that we need to reduce our footprint to build a better future?

As the slogan goes, “On which side do you stand? The dirty dollar, or the pristine land?” 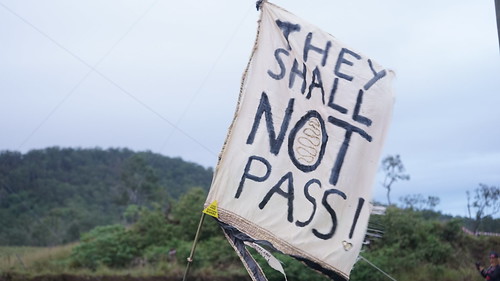 One thought on “Battle of Bentley blockade goes to the tribe”