Twenty-five neighborhoods in the city, with an estimated population of 75,000, have already been evacuated due to floods 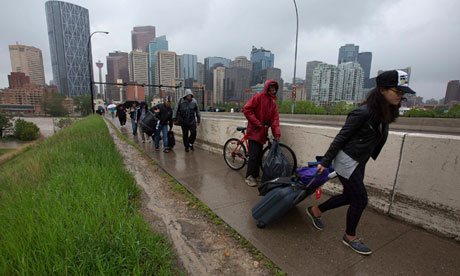 Flooding forced the western Canadian city of Calgary to order the evacuation of the entire downtown area on Friday, as the waters reached the 10th row of the city’s hockey arena.

About 230,000 people work downtown on a typical day. However, officials said very few people need to be moved out, since many heeded warnings and did not go to work on Friday.

Twenty-five neighborhoods in the city, with an estimated population of 75,000, have already been evacuated due to floodwaters in Calgary, a city of more than a million people that hosted the 1988 Winter Olympics and is the center of Canada‘s oil industry.

No deaths were reported since torrential rains hit the region Wednesday night, although one woman swept away with a mobile home was still missing.

In the downtown, water was inundating homes and businesses in the shadow of skyscrapers. Water has swamped cars and train tracks.

The city said the home rink of the National Hockey League Calgary Flames has flooded and the water inside is 10 rows deep. The 19,000-seat Saddledome is one of the feature buildings on the famed Calgary Stampede grounds, which is largely under water.

Officials said there was little that can be done to pump the water out of the building because there is simply too much.

About 1,500 have gone to emergency shelters while the rest have found shelter with family or friends, Mayor Naheed Nenshi said.

Nenshi said he’s never seen the rivers that high or that fast, but said the flooding situation is as under control as it can be. Nenshi said the Elbow River, one of two rivers that flow through the southern Alberta city, has peaked. And if things don’t change, officials expect that the flow on the Bow River – which, in in the mayor’s words early Friday, looks like “an ocean at the moment” – will remain steady for the next 12 hours.

Police urged people to stay away from downtown and not go to work.

The flood was forcing emergency plans at the Calgary zoo, which is situated on an island near where the Elbow and Bow rivers meet. Lions and tigers were being prepared for transfer, if necessary, to prisoner holding cells at the courthouse.

Schools and court trials were cancelled Friday and residents urged to avoid downtown. Transit service in the core was shut down.

Alberta Premier Alison Redford promised the province will help flood victims put their lives back together and provide financial aid to communities that need to rebuild The premier said at a briefing that she has spoken to Prime Minister Stephen Harper, who is heading to Calgary and has promised disaster relief. She urged people to heed evacuation orders, so authorities could do their jobs. She called the flooding that has hit most of southern Alberta an “absolutely tragic situation.

The premier warned that communities downstream of Calgary have not yet felt the full force of the floodwaters.

It had been a rainy week throughout much of Alberta, but on Thursday the Bow River Basin was battered with up to 100 millimeters (four inches) of rain. Environment Canada’s forecast calls for more rain in the area, but in much smaller amounts.

Calgary is not alone in its weather-related woes. There have been flashpoints of chaos from Banff and Canmore and Crowsnest Pass in the Rockies and south to Lethbridge.

More than a dozen towns have declared states of emergency. Entire communities, including High River and Bragg Creek, near Calgary are under mandatory evacuation orders.

Some of the worst flooding hit High River, where it’s estimated half of the people in the town have experienced flooding in their homes.

Military helicopters plucked about 30 people off rooftops in the area. Others were rescued by boat or in buckets of heavy machinery. Some even swam for their lives from stranded cars.

A spokesperson for Defense Minister Peter MacKay said 354 soldiers are being deployed to the entire flood zone.

Further west, in the shadow of the Rocky Mountains, pictures from the mountain town of Canmore depicted a raging river ripping at house foundations.