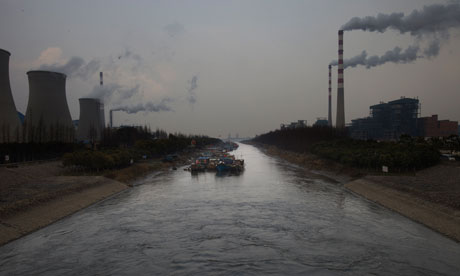 Rapid development of China’s cities has coincided with the promotion of urban sustainability while factories are moved to remote areas where their environmental impact is less visible. Photograph: Lu Guang/Greenpeace

In most Chinese cities, the environmental cost of rapid development is obvious: unbreathable air and undrinkable water. Less obvious is the cost of cleaning them up.

Since the late 1990s, the “National model city for environmental protection programme” has accredited at least 76 cities nationwide as exemplars of urban sustainability, based on criteria including clean air, rubbish-free streets and ample public parks.

Yet China is also home to hundreds of cancer villages, and a US-based academic has spent years drawing a link between the two. “I think a majority of model cities also have cancer villages, one or two or three of them,” said Lee Liu, a geography professor at the University of Central Missouri.

Liu argued in a recent book that China’s quest for green cities has created cancer villages on their fringes, as ambitious municipal governments shunt factories to areas where their environmental impact is less visible.

But scientific proof linking disease rates with factory pollution is elusive: “How can you prove that a dirty factory caused your cancer? You can’t,” Liu said. “So the link is indirect. But if you map it, you see clusters around these cities.”