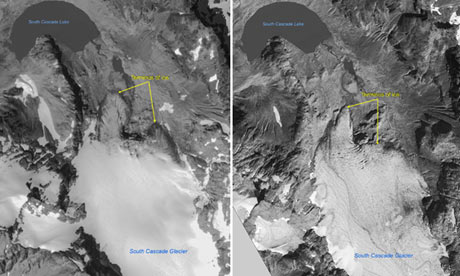 Climate change is melting America’s glaciers at the fastest rate in recorded history, exposing the country to higher risks of drought and rising sea levels, a US government study of glaciers said today.

The long-running study of three “benchmark” glaciers in Alaska and Washington state by the US geological survey (USGS) indicated a sharp rise in the melt rate over the last 10 or 15 years.


Scientists see the three – Wolverine and Gulkana in Alaska and South Cascade in Washington – as representative of thousands of other glaciers in North America.

“The observations show that the melt rate has definitely increased over the past 10 or 15 years,” said Ed Josberger, a USGS scientist. “This certainly is a very strong indicator that climate change is occurring and its effects on glaciers are virtually worldwide.”

The survey also found that all three glaciers had begun melting at the same higher rate – although they are in different climate regimes and some 1,500 miles apart.

For South Cascade, the average surface loss rate grew to 1.75 to 2m a year from about 1m a year.

USGS researchers have been measuring the three glaciers for more than 50 years, drawing on photographs and a network of stakes driven into the glaciers to gauge the accumulation of snow during winter, and the resulting melt each spring. It is the oldest such record of glacier activity.

In a sign of the Obama administration‘s focus on climate change, this year’s survey was promoted by the interior secretary, Ken Salazar, who called it an important contribution to dealing with climate change. “This information is helpful in tackling the effects of climate change and it is exactly the kind of science we need to invest in to measure and mitigate the dangers impacts of climate change,” he said.

Shrinking glaciers have led to a reduction in spring run-off which is intensifying the effects of drought in California and other states, especially later in the summer when other water sources dry up.

Glacier loss has also contributed to rising sea levels, which has put low-lying coastal areas – such as New Orleans – at greater risk of storm surges.