Exposure worsens rapidly, with stresses on water increasing and the cost of natural disasters running second only to China 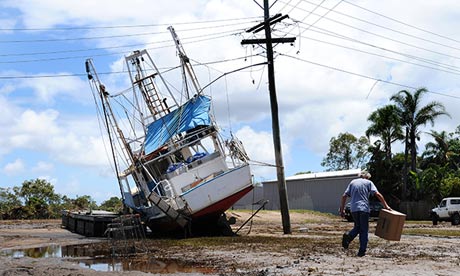 Australia‘s exposure to climate change has worsened more rapidly than in any other major economy in the past two years, with stresses on water supplies increasing and the cost of natural disasters running second only to China, a report has found.

The study, compiled by HSBC, found that temperatures in Australia had risen faster than in any other G20 country over the past two years – up by 0.39C to 18.9C on a decade average basis. Deterioration in water resources is also a major issue, with Australia, along with Saudi Arabia, experiencing the worst increases.

HSBC concluded that India, China, Indonesia, South Africa and Brazil are the countries most vulnerable to climate change, based on the challenges posed by climate change and their ability to respond to them.

However, Australia’s position appears to be worsening, with the country now placed as the fifth worst in the G20 for climate change exposure, down five places from HSBC’s last climate report in 2011. This separate ranking is based on a country’s exposure to temperature increases, water stresses and extreme events.

HSBC said that this downgrading was largely due to Australia’s G20-leading temperature increase, although it is clear that water stresses and natural disasters have also taken their toll.

Australia’s water resources per capita have dropped 6.8% in the past two years, according to the report. Meanwhile, Australia spends 0.24% of GDP on recovery from disasters caused by natural events such as floods and cyclones, second only to China (0.30%).

According to the report, damage caused by natural disasters hit $US260bn in the decade to 2012.

On Friday, the International Climate Change Partnership’s authoritative climate change report revealed that Australia was on course for a 6C temperature increase on its warmest days by 2100. Australia can also expect to lose many bird, reptile and mammal species, as well as the Kakadu wetlands in the Northern Territory.

“The transition to a clean energy economy is a major issue for Australia as it is way too emissions intensive than it should be,” he said. “This provides a high degree of economic exposure.

“Our research has also shown that key sectors which Australia invests in, such as mining and minerals, manufacturing and transport, all have significant physical vulnerabilities which we expect to be more severe by 2030.

“That means businesses have to build resilience within assets and adapt by relocation if possible. It’s a critical issue for Australian companies and it’s starting to filter into conversations in boardrooms.”

Get £11 off the Guardian and Observer