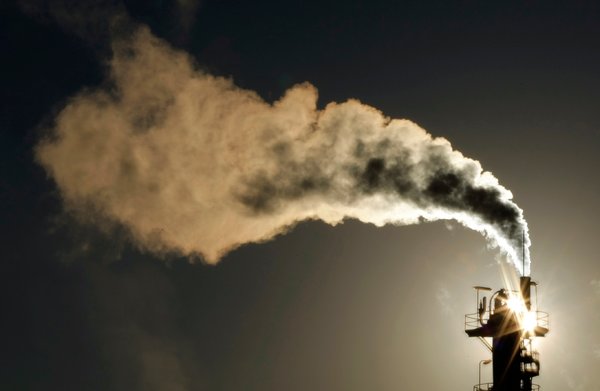 A new report from the Intergovernmental Panel on Climate Change states that the authors are now 95 percent to 100 percent confident that human activity is the primary influence on planetary warming.

An international panel of scientists has found with near certainty that human activity is the cause of most of the temperature increases of recent decades, and warns that sea levels could conceivably rise by more than three feet by the end of the century if emissions continue at a runaway pace.

The level of carbon dioxide, the main greenhouse gas, is up 41 percent since the Industrial Revolution. Emissions from facilities like coal-fired power plants contribute.

The scientists, whose findings are reported in a draft summary of the next big United Nations climate report, largely dismiss a recent slowdown in the pace of warming, which is often cited by climate change doubters, attributing it most likely to short-term factors.

The report emphasizes that the basic facts about future climate change are more established than ever, justifying the rise in global concern. It also reiterates that the consequences of escalating emissions are likely to be profound.

“It is extremely likely that human influence on climate caused more than half of the observed increase in global average surface temperature from 1951 to 2010,” the draft report says. “There is high confidence that this has warmed the ocean, melted snow and ice, raised global mean sea level and changed some climate extremes in the second half of the 20th century.”

The draft comes from the Intergovernmental Panel on Climate Change, a body of several hundred scientists that won the Nobel Peace Prize in 2007, along with Al Gore. Its summaries, published every five or six years, are considered the definitive assessment of the risks of climate change, and they influence the actions of governments around the world. Hundreds of billions of dollars are being spent on efforts to reduce greenhouse emissions, for instance, largely on the basis of the group’s findings.

The coming report will be the fifth major assessment from the group, created in 1988. Each report has found greater certainty that the planet is warming and greater likelihood that humans are the primary cause.

On sea level, which is one of the biggest single worries about climate change, the new report goes well beyond the assessment published in 2007, which largely sidestepped the question of how much the ocean could rise this century.

The new report also reiterates a core difficulty that has plagued climate science for decades: While averages for such measures as temperature can be predicted with some confidence on a global scale, the coming changes still cannot be forecast reliably on a local scale. That leaves governments and businesses fumbling in the dark as they try to plan ahead.

On another closely watched issue, the scientists retreated slightly from their 2007 position.

Regarding the question of how much the planet could warm if carbon dioxide levels in the atmosphere doubled, the previous report largely ruled out any number below 3.6 degrees Fahrenheit. The new draft says the rise could be as low as 2.7 degrees, essentially restoring a scientific consensus that prevailed from 1979 to 2007.

But the draft says only that the low number is possible, not that it is likely. Many climate scientists see only a remote chance that the warming will be that low, with the published evidence suggesting that an increase above 5 degrees Fahrenheit is more likely if carbon dioxide doubles.

The level of carbon dioxide, the main greenhouse gas, is up 41 percent since the Industrial Revolution, and if present trends continue it could double in a matter of decades.

Warming the entire planet by 5 degrees Fahrenheit would add a stupendous amount of energy to the climate system. Scientists say the increase would be greater over land and might exceed 10 degrees at the poles.

They add that such an increase would lead to widespread melting of land ice, extreme heat waves, difficulty growing food and massive changes in plant and animal life, probably including a wave of extinctions.

A version of this article appears in print on August 20, 2013, on page A1 of the New York edition with the headline: Climate Panel Cites Near Certainty on Warming.

Get Free E-mail Alerts on These Topics

For Families of Dead Firefighters, a Fight Over Compensation

Log in to discover more articles
based on what you‘ve read.

How One Man Saved Over $8,000 on Brand-New Products