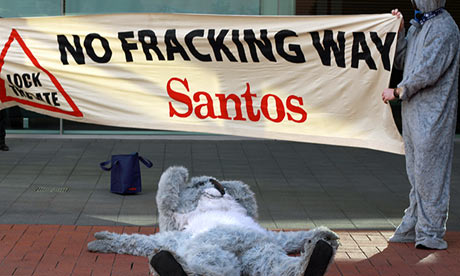 Anti-coal seam gas campaigners are gearing up to launch legal action over the decision by the federal government to approve an exploration project in the Pilliga forest in New South Wales.

The federal environment minister, Greg Hunt, has decided that the Santos-led development does not require full assessment under the national Environment Protection and Biodiversity Conservation Act.

Hunt has, however, added several conditions for the coal seam gas pilot project, requiring that construction cease during breeding season if the threatened Pilliga mouse, regent honeyeater or koala are found in pre-clearance surveys.

Santos will have to monitor groundwater, but it will be allowed to fell 400 hollow-bearing trees and remove up to 235 orchids.

The project, which will involve the drilling of 36 pilot production wells in the state forest, has enraged environmentalists and community groups.

More than 3,800 submissions over the development were sent to the government, most in opposition to Santos’s plans. Opponents claim Hunt should assess the project under the “water trigger” legislation that requires all development that may impact the water table be scrutinised by the federal government.

There are also concerns the project will harm threatened species, including recently discovered stygofauna – ancient water-cleansing micro-organisms that dwell beneath the ground.

Carmel Flint, co-ordinator of anti-CSG group Lock the Gate Alliance, told Guardian Australia that community activists would ramp up protests in the wake of Hunt’s decision.

“This decision will raise alarm bells throughout the country among communities who want to have a say over coal and unconventional gas mining,” she said. “This was a big test for the new federal environment minister and it’s a huge worry that he’s decided to go ahead with it without further assessment.

“There are genuine legal questions as to how [Hunt] reached this conclusion. He’s approved the destruction of threatened species without any assessment, which is contrary to the Environment Protection and Biodiversity Conservation Act.

“Given the rhetoric from the likes of [energy minister] Ian Macfarlane recently, it isn’t hugely surprising. But I think the government will find there is a deep and broad opposition to the free-for-all mining they are proposing.”

One of the submissions to the government, from a hydrologist, Andrea Broughton, questioned the groundwater modelling done by Santos before the project starting.

“I would’ve liked to have seen a proper environmental assessment done,” she told Guardian Australia. “The model is based on a serious lack of data. The groundwater monitoring isn’t in place to know whether the water table will be impacted.

“Santos says there will be a 0.5m drawdown in the water level over the next 500 years. I find that very hard to believe.”

Santos said it welcomed the government’s decision and insisted that its decision to refer the project for approval shows its commitment to transparency.

“Although our own independent assessment indicated the exploration program would not activate the ‘water trigger’, we wanted to be completely transparent with regard to our initial exploration and appraisal program,” said Sam Crafter, a company spokesman.

“We believed the referral was the sensible way to ensure the predicted impacts on water resources had been thoroughly assessed by all the relevant bodies.”

Crafter added that all of the assessment work done so far, along with the government’s decision, demonstrates the project won’t have a major environmental impact.