Coalition will ‘get around’ new law on coal seam gas

Coalition will ‘get around’ new law on coal seam gas 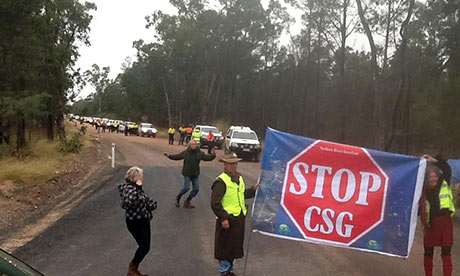 The Coalition says it will ‘get around’ a new law to force the federal government to take responsibility for coal seam gas, giving power for environmental assessments to the states to speed up the approval process and boost the CSG industry.

In June the Senate is likely to pass the Gillard government’s legislation requiring the federal government to take account of the cumulative impact on the water table of developments like coal seam gas wells.

The bill, which inserts water as a trigger under the Environmental Protection and Biodiversity Conservation Act, was amended in the lower house at the initiative of Independent Tony Windsor. The amendement was intended to “put beyond doubt” that the commonwealth had to give the final approvals for coal seam gas wells, taking into account their impact on water, and that it could not hand this power over to state governments. The Coalition opposed the amendment, but did not oppose the bill, which passed.

But Coalition resources spokesman Ian Macfarlane says that the new law, even with Windsor’s amendment, “contains nothing to prevent” the Coalition from proceeding with its stated policy intention to hand over environmental assessments to the states, including for gas wells, under strict standards set by the commonwealth.

“We can get around it,’ he said. ‘We want a one stop shop, and that’s what we will achieve. We’ll delegate approvals to the states. We already have an expert panel to assess water impacts. Labor is assuming the state governments are incompetent and don’t have processes in place to deal with it,” he said.

“The only thing they will actually achieve is a slower approval process for no environmental benefit, because if the state is handling an assessment and approval they will have to add this to their process”.

At the same time Macfarlane is pressing NSW to approve more CSG wells because of a looming “gas crisis” in the state.

He attacked the NSW Government for broad restrictions that have caused a virtual investment freeze on new CSG projects and told a conference this week that NSW “better get busy. They’re facing an enormous crisis”.

“The pressure we can put on is to make sure the O’Farrell government understands that it’s likely to be in power when Sydney runs out of gas,” Macfarlane said.

“Gas is either going to get so expensive that some users will stop using it, the price will make it uneconomical or there might not be enough to go around.”

The chief executive of the Victorian Environmental Defenders’ Office, Brendan Sydes, said Macfarlane was wrong when he said that the new law would not force the commonwealth to make the final decision on projects.

“The whole intent is to remove the ability to delegate those powers to the states…it is hard to see how you could get around that,” he said.

“As a former practising environmental lawyer with ten years in this field, I am confident that the amendment moved by Mr Windsor would prevent future federal governments from delegating the decision on whether to approve projects covered by the water trigger to state governments. Any attempt to delegate powers without the explicit statutory power to do so would leave the federal government open to challenge in court for breach of statutory duty and possibly on other grounds too,” she said.

The coal seam gas industry has been fighting back since escalating community concerns over the environmental impact of CSG prompted the federal government to give in to Mr Windsor’s lobbying for a water trigger. It also prompted the NSW Liberal Government to impose a 2km exclusion zone around residential areas and bans on CSG wells in the Hunter Valley, which is prime agricultural land.

The NSW Resources and Energy Minister, Liberal Chris Hartcher, said the CSG debate had been captured by a “hard core” of opponents who wanted to shut down all energy from fossil fuels and said the industry had not done enough to explain its case.

“Industry did not engage in the debate, industry stood back and allowed the debate to happen in the early stages and that vacuum was very quickly filled by the extremist Greens, of which Sydney has its fair share,” he said.

Federal resources minister Gary Gray also told companies at the conference that they should work together to argue their case, rather than allow activists to spread “fear and confusion”.

The Gillard Government also had a policy of handing over environmental assessments to the states in order to cut “green tape” but abandoned it in the face of a backlash from environment groups and failure to get uniform agreements with all states.

CSG is likely to be a big issue in several NSW seats, in particular New England where Mr Windsor is being challenged by high-profile Nationals candidate, now Senator, Barnaby Joyce.

Frequently Asked Questions for Renovators and Homeowners What is ASBESTOSPrev
Global warming is changing Arctic seas from where CO2 is absorbed to where it is produced, new study warnsNext