Coral is the canary in the cage as damage can be seen most quickly, veteran naturalist tells Royal Socie 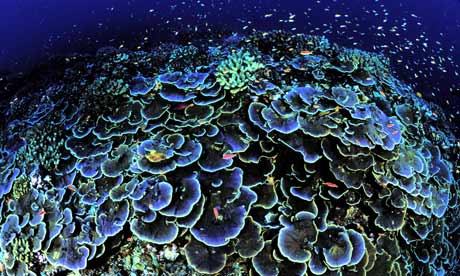 A coral seen off Jarvis Island in the Pacific Ocean. Photograph: Jim Maragos/AP

David Attenborough joined scientists yesterday to warn that carbon dioxide in the atmosphere is already above the level which condemns coral reefs to extinction in the future, with catastrophic effects for the oceans and the people who depend upon them.

Coral reefs support a quarter of all marine life including more than 4,000 species of fish. They also provide spawning, nursery, refuge and feeding areas for creatures such as lobsters, crabs, starfish and sea turtles. This makes them crucial in supporting a healthy marine ecosystem upon which more than 1bn people depend for food. Reefs also play a crucial role as natural breakwaters, protecting coastlines from storms.

Attenborough said the world had a “moral responsibility” to save corals.

He was speaking yesterday at the Royal Society in London, following a meeting of marine biologists. At the current rate of increase of atmospheric CO2, they said, coral would become extinct within a few decades.

“A coral reef is the canary in the cage as far as the oceans are concerned,” said Attenborough. “They are the places where the damage is most easily and quickly seen. It is more difficult for us to see what is happening in, for example, the deep ocean or the central expanses of ocean.”

Increasing carbon dioxide in the atmosphere has a double effect on coral. Global warming means warmer seas, which causes the corals to to bleach, where the creatures lose the symbiotic algae they need to survive. Carbon dioxide also makes seas more acidic, which means the corals find it difficult to prevent their exoskeletons from dissolving.

“We’ve already passed a safe threshold for coral reef ecosystems in terms of climate change. We believe that a safe level for CO2 is below 350 parts per million,” said Alex Rogers of the Zoological Society of London and International Programme on the State of the Ocean, who helped organise yesterday’s meeting.

Carbon dioxide in the atmosphere has risen from 280 ppm before the industrial revolution to around 387ppm today. Environmentalists say that any new global deal on climate must restrict the growth of CO2 levels to 450ppm, though more pessimistic scientists say that the world is heading for 550ppm or even 650ppm.

“When we get up to and above 450ppm, that really means we’re into the realms of catastrophic destruction of coral reefs and we’ll be moving into a planetary-wide global extinction,” said Rogers.

“The only way to get to 350ppm or below is not only to have major cuts in CO2 emissions but also to draw CO2 out of the atmosphere through measures such as geo-engineering.”

Attenborough said the plight of the corals was another example of why the control of carbon was so important to the world’s inhabitants. “Each ecological disaster or problem traces its cause back to carbon. To quibble about this is really fiddling while Rome burns. If we do not control the emission of carbon, this world is heading for a major catastrophe and this is one of the first to be staring us straight in the face.”