Could climate change be added to the civil rights agenda?

Should climate change be added to the civil rights agenda?

This week, tens of thousands of people from across America streamed into the nation’s capital to observe the 50th anniversary of the 1963 March on Washington — and Green for All was among them 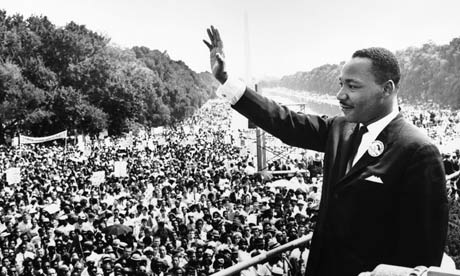 Fighting global warming – the right way – will get us closer to achieving the dream Martin Luther King Jr. spoke about on that day in Washington 50 years ago. Photograph: Hulton-Deutsch Collection/CORB

We marched against the recent attack on voting rights. We demanded justice in the face of Stand Your Ground laws and racial profiling. We marched to raise awareness on unemployment, poverty, gun violence, immigration, and gay rights. And we called for action on climate change.

Chances are, when you think about civil rights, environmental issues aren’t on the radar screen. But stop and think about it. Remember Hurricane Katrina?

The hurricane that leveled New Orleans showed that severe weather in low-income neighborhoods and communities of colour is a matter of life and death. The images from the storm are hard to forget: bodies floating in water for days and thousands of people stranded without shelter, waiting for help that was too slow to come.

It’s not difficult to see how injustice and inequality played out during Hurricane Katrina. Thousands of people were subjected to needless loss, suffering, even death — just because they didn’t have the resources to prepare and escape the storm.

What’s harder to see is the imminent threat that severe weather — occurring with increased frequency and voracity — poses to our communities. We should never again witness the kind of devastation and preventable suffering we saw during Katrina. That’s why we have to add climate change to our retooled list of what the civil rights movement stands for.

Climate change isn’t just an environmental issue; it’s about keeping our communities safe. It’s a matter of justice. Because when it comes to disasters — from extreme temperatures to storms like Katrina — people of colour are consistently hit first and worst.

African-Americans living in L.A. are more than twice as likely to die in a heat wave as other residents in the city, thanks to an abundance of pavement and lack of shade, cars, and air conditioning in neighborhoods with the fewest resources. Factor in a steady rise in temperature — last year was the hottest year on record in the U.S. — and we’re looking at an urgent problem.

Meanwhile, our communities are at the tip of the spear when it comes to pollution. Fumes from coal plants don’t just accelerate climate change — they cause asthma, heart disease and cancer, leading to 13,000 premature deaths a year. And people of colour are once again most vulnerable; 68% of African-Americans live within 30 miles of a toxic coal plant. That might help explain why one out of six black kids suffers from asthma, compared with one in 10 nationwide.

But that’s not the only reason we should pay attention. Fighting global warming – the right way – will get us closer to achieving the dream Martin Luther King Jr. spoke about on that day in Washington 50 years ago.

The solutions to climate change won’t just make us safer and healthier — they are one of the best chances we’ve had in a long time to cultivate economic justice in our communities. Clean energy, green infrastructure, and sustainable industries are already creating jobs and opportunity. There’s a cleantech boom unfolding right now that is on par with the tech boom that made Silicon Valley. And this time, we don’t want to miss the boat.

If we do this right, we can make sure the steps we take to fight pollution also build pathways into the middle class for folks who have been locked out and left behind. These green jobs are real — 3.1 million Americans already have them. And because they pay more (13% above the median wage) while requiring less formal education, they are exactly what’s needed to eradicate poverty in our communities.

We have work to do to make sure more people of color have access to the opportunities created by responding to climate change. But if we are successful, we will help create a world where our kids can breathe clean air and drink clean water; where we’re safe and resilient in the face of storms; where more of us share in the nation’s prosperity.

This is Dr. King’s dream reborn. And fighting climate change helps get us there.

So, even as we confront the pressing dangers and injustices that cry for an immediate response — like attacks on our right to vote or racial profiling — we can’t lose sight of the future. We need to respond to climate change today to ensure safe, healthy, prosperous lives for our kids tomorrow.

Money trail backs the clean energy revolutionPrev
What are our options in Syria?Next