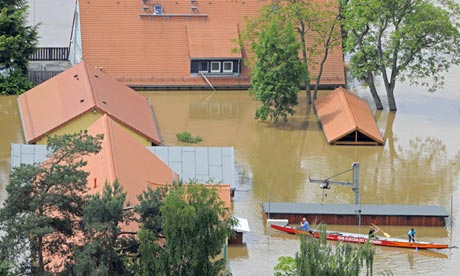 People paddle in a boat between houses flooded by the river Elbe in Dresden. Photograph: Jens Meyer/AP

The river Elbe flooded on Thursday in the eastern German city of Dresden, sparing the historic centre but engulfing wide areas of the Saxony capital.

Residents and emergency crews had worked through the night to fight the floods in Dresden. The German military and national disaster team sent more support in a frantic effort to sandbag levees and riverbanks as floodwaters that have claimed 16 lives since last week surged north.

“Everybody’s afraid but the people are simply fantastic and sticking together,” said Dresden resident Silvia Fuhrmann, who had brought food and drinks to those building sandbag barriers.

The Elbe hit 8.76m around midday – well above its regular level of 2m. Still, that was not high enough to damage the city’s famous opera, cathedral and other buildings in its historic centre, which was devastated in a flood in 2002.

Germany has 60,000 local emergency personnel and aid workers, as well as 25,000 federal disaster responders and 16,000 soldiers now fighting the floods.

Farther downstream, the town of Lauenburg – just southwest of Hamburg – evacuated 150 houses along the Elbe, n-tv news reported, as the floodwaters roared toward the North Sea.

In the south, the Bavarian city of Deggendorf was hit by a third levee break on Thursday, with floods gushing into neighbourhoods. Scores of homes remained underwater and authorities warned that a dam was still in danger of bursting.