End this love for dirty fuels

End this love for dirty fuels

The future belongs to clean energy, but the UK is embracing shale gas and fracking instead of renewables – appalling policy 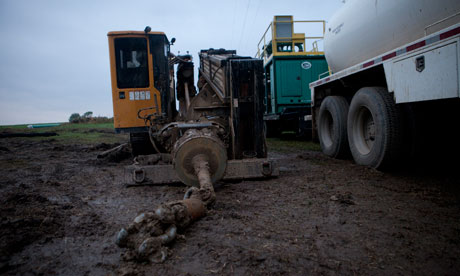 Fracking equipment: shale gas is an inefficient fuel to exploit, and its extraction will accelerate climate change. Photograph: Amy Sussman/Corbis

That blaring noise you can hear could be the sound of the UK missing the boat. A succession of crises over more than a decade revealed the UK’s dependence on fossil fuels, increasingly imported, to be both perilous and expensive. The fuel protests of 2000 showed the interconnected vulnerability of our food and fuel systems, while the oil price spike of 2008 revealed the economy as hostage to volatile market.

You’d think then, that if only as an exercise in prudent government – forget about climate change for a moment – aggressive energy diversification into abundant, domestic renewable sources would be a good idea.

Yet, if anything, flip-flopping on feed-in tariffs and scaldingly negative remarks from the chancellor, George Osborne, and others have, wilfully or not, undermined a whole UK industrial sector just as it could be growing, creating jobs and being a world leader.

Renewables are, according to the International Energy Agency, now the fastest growing global energy sector, set to beat gas and generate double the supply from nuclear power by 2016.

You might think that any government would look at a market like that, which can only get bigger (while oil, for example, by definition can only do the opposite), and want a big slice.

Why, then, would the Treasury go out of its way to remain in ignorance of both the problem and the opportunity represented by climate change and the challenge of resource depletion? In March it was revealed that the most powerful department in government had its head shoved firmly in the sand.

A group of senior economists from across Whitehall wanted to review how resource scarcity and climate change would interact with the economy and effect growth. The interests of both industry and environmental groups were to be explored and both sectors were supportive of the study. But the proposal was apparently killed by the Treasury’s chief economist as ‘too speculative’ in its reach.

Less speculative unfortunately, is the recent trajectory of the UK’s greenhouse gas emissions and reliance on imported fossil fuels.

Even discounting the UK’s ‘hidden emissions’ embedded in the goods we import and consume, carbon emissions rose by 4% in 2012, driven by a surge in the use of coal to generate electricity. In comparison, to reach a fair and climate-safe level, emissions need to fall by something of the order of 10% per year for the foreseeable future.

Figures from the Department of Energy and Climate Change also revealed that energy imports rose by 7% meaning that we are now dependent on imports for nearly half (43%) of our energy use.

More positively, in spite of the instability introduced to the green energy sector by government policy, in line with the global upswing, electricity generated from renewables went up by about one fifth in 2012 compared to the previous year.

Yet, from the apparently ‘desolate’ north, to the Tory front line of the home counties, political priority is given to the development of shale gas, a difficult, dirty and inefficient fuel to exploit, whose extraction will accelerate climate change.

Last month I wrote about how the American petro-state of Louisiana exhibited the characteristics of a developing country suffering the ‘resource curse.’ It had the paradox of huge revenues from exploiting natural resources leading not to human flourishing, but instead dependency, corruption, environmental damage and appalling social indicators.

Since then, Louisiana appears to be having second thoughts. It seems, in effect, to be suing itself for decades of damage resulting from dependence on fossil fuel earnings.

Officials from the state body responsible for flood protection are suing a host of energy companies including BP and Exxon Mobil for damage to vulnerable coastal wetlands that are vital to protecting the land from extreme weather, such as the impact of worsening hurricanes. A ‘buffer’ that took 6,000 years to form, they say has ‘been brought to the brink of destruction over the course of a single human lifetime.’ It has set experts against politicians, with the Republican state governor accusing his officials of overstepping their authority.

Today there is generally a much higher level of awareness about the impact of the fossil fuel industry, both locally and globally. In spite of perverse political backing, its future is less than bright. There are the hard-won lessons of places like Louisiana. Middle class militancy is breaking out on the fracking front line of Balcombe, West Sussex before even a pilot drill has gone down, and former oil engineers turned renewable entrepreneurs like Jeremy Leggett predicting that not a single commercial well will open.

Suddenly the renewables boat seems to offer a much smoother and less stressful journey. Time to climb aboard.

More from 100 months to save the world on