EU votes on crucial cap on biofuels made from food crops

EU votes on crucial cap on biofuels made from food crops 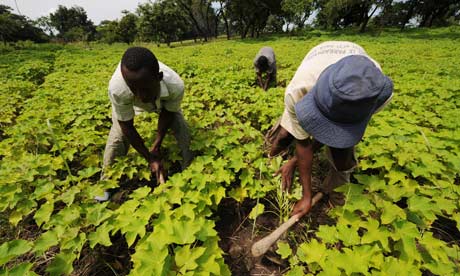 Employees work in a Jatropha nursery field in Dimbokro, Ivory Coast. Jatropha produces an oil that can be used as diesel substitute for power plants or engines. Photograph: Kambou Sia/AFP/Getty Images

Votes taken by European parliamentary committees this week could determine the future of EU biofuels policy, which has been strongly criticised for its negative impact on developing countries.

In response to the widespread criticism, the European commission last year proposed major policy changes, including the introduction of a 5% limit on counting food crop-based biofuels towards the target for 10% of transport fuels to be generated using renewable energy by 2020.

The commission said the move would stimulate the development of alternative, “second generation” biofuels from non-food crops, such as waste or straw, which emit substantially fewer greenhouse gases than fossil fuels and do not directly interfere with food production.

It also proposed for the first time to take into account the impact of deforestation, peatland drainage or other land clearance caused by biofuels in their carbon footprint. Environment and development campaigners argue this factor – indirect land-use change (ILUC) – has been missing from calculations of the green credentials of biofuels.

But campaigners fear that MEPs, under fierce lobbying by the biofuels industry and farmers’ unions, will weaken the commission’s proposals before a full parliamentary vote in September.

In votes on Tuesday, the transport and international trade committees voted to raise the biofuels limit to 6.5%, rather than the 5% proposed by the commission.

Negotiations are under way before Thursday’s vote on the industry, research and energy committee, but the committee’s draft does not bode well either. The committee is seeking to remove the 5% limit and replace reporting on the impact of converting to biofuels – the ILUC element – with voluntary mitigation measures. The environment committee will vote next month, reflecting the widespread nature of the biofuels debate in the EU.

Ahead of this week’s votes, Olivier De Schutter, the UN special rapporteur on the right to food, wrote a letter (pdf) to the commission, member states and MEPs that was highly critical of EU biofuels policy. He is concerned that EU policy creates incentives for land leases or acquisitions, particularly in sub-Saharan Africa, in which the rights of current land users are inadequately protected.

Figures vary on the amount of land that is used to grow biofuels. The commission estimates that between 2003 and 2008 6.6m hectares (16.5 million acres) of additional arable land globally was cultivated for biofuels.

“The land and water resources of the countries concerned should serve, in the first instance, the realisation of the right to food of the local populations; these populations should not be forced to compete against EU consumers, whose purchasing power is vastly higher,” said De Schutter.

De Schutter said biofuels had pushed up food prices, with estimates that, by 2020, EU biofuel targets could ramp up the agricultural price of vegetable oils by 36%, maize by 22%, wheat by 13% and oilseeds by 20%. Another concern is that biofuels favour large-scale industrial models of agriculture that appear to offer limited benefits to local populations, particularly smallholder farmers.

De Schutter argues that EU policy on biofuels contradicts its development objectives, as well as possibly contravening its legal obligations.

“The EU member states are all state parties to the international covenant on economic, social and cultural rights, which impose a duty to abstain from measures that could threaten the realisation of economic and social rights in other countries,” said De Schutter.

Research for the Chatham House thinktank says reaching the 5% level means UK motorists will have to pay an extra £460m a year because of the higher cost of fuel and from filling up more often as biofuels have a lower energy content. The report (pdf) says that if the UK is to meet its obligations to EU energy targets, the cost to motorists is likely to rise to £1.3bn per annum by 2020.

The European Biodiesel Board, an industry body, said the changes proposed by the commission could lead to the “catastrophic” end of an industry worth €10bn (£8.5bn) a year.

Why would the ALP vote against stronger environmental protection?Prev
The Australian Business Roundtable for Disaster Resilience and Safer Communities commissioned a fact-based, comprehensive White Paper,Next