We’ve seen it in climate change reporting; we see it in shutdown coverage. Journalists should be unbiased, yes, but not brainless 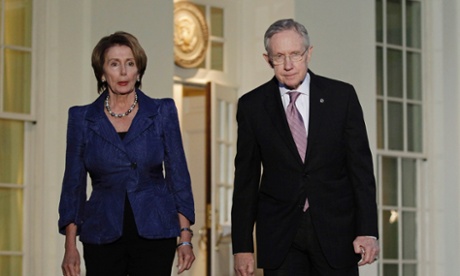 Democratic congressional leaders Nancy Pelosi and Harry Reid at the White House: a Washington Post editorial implied they were equally to blame as House Republicans for the government shutdown. Photograph: Yuri Gripas/Reuters

Let us state this unequivocally: false equivalency – the practice of giving equal media time and space to demonstrably invalid positions for the sake of supposed reportorial balance – is dishonest, pernicious and cowardly.

On the other hand, according to the grassroots American Council of Liberty Loving Ordinary White People Propped Up by the Koch Brothers, the liberal media want to contaminate your precious bodily fluids and indoctrinate your children in homosocialism.

Haha, kidding. Of course, there’s no such group. But false equivalency in the news has been very much, in fact, in the news lately – thanks to reporting on the US government shutdown that characterizes the impasse as the consequence of two stubborn political parties unwilling to compromise on healthcare. For instance, this was the final paragraph of a Washington Post editorial:

Ultimately, the grown-ups in the room will have to do their jobs, which in a democracy with divided government means compromising for the common good. That means Mr Boehner, his counterpart in the Senate, Harry M Reid (D-Nev), minority leaders Sen Mitch McConnell (R-Ky) and Rep Nancy Pelosi (D-Calif) and the president. Both sides are inordinately concerned with making sure that, if catastrophe comes, the other side takes the political hit. In truth, none of their reputations stands to benefit.

Mutually obdurate pols – it’s a fetching narrative, since Republicans and Democrats are undisputedly more polarized than they’ve been in a century, yielding endless posturing and partisan gridlock. Except, the narrative is wrong. The shutdown is not the result of the divide between Republicans and Democrats on Obamacare: that issue has been legislated, ratified by two presidential elections, affirmed by the US supreme court and more than 40 times unrepealed by Congress.

No, the shutdown is the result of the divide between mainstream, center-right Republicans and Tea Party extremists. The latter are wrapped in suicide belts and perfectly willing to blow the GOP and the economy to kingdom come if they can: a) kill Obamacare (as if); or b) guarantee campaign windfalls from likeminded anti-government crackpots.

This is not gridlock. It is a hostage situation.

Others, however, see things differently. In a recent post calling for Obama’s impeachment, headlined “Barack Hussein Obama: The New Leader of al-Qaida”, the website Tea Party Nation accused the president of treason. As US Representative Virginia Foxx (Republican, North Carolina) warned the House upon passage of Obamacare in 2009:

I believe we have more to fear from the potential of that bill than we do from any terrorist right now in any country.

Haha, not kidding. Those quotations are real – and why not? There has never been a shortage of paranoia in politics. What has changed is the press’s willingness to give it oxygen.

As an institution, the American media seem to have decided that no superstition, stupidity, error in fact or Big Lie is too superstitious, stupid, wrong or evil to be disqualified from “balancing” an opposing … wadddyacallit? … fact. Because, otherwise, the truth might be cited as evidence of liberal bias.

Thus do the US media aid and abet Swiftboaters, 9/11 “Truthers”, creationists and “Birthers”, whose bizarre charge that the president was born overseas required us to believe a conspiracy involving hospital employees and Honolulu newspapers dating to infant Barack Hussein Obama’s first day on earth.

Birthers are liars, morons, bigots or some combination of all three, yet, for four years, the press treated them as if they were worthy of consideration, dignifying their delusion by addressing it. Note the equivocating language from this Associated Press dispatch:

So-called “birthers” – who claim Obama is ineligible to be president because, they argue, he was actually born outside the United States – have grown more vocal recently on blogs and television news shows.

Yeah, blogs, TV news shows … and wire reports. Question: what is so difficult about calling bullshit on a lie?

As recently as a week ago, upon the release of the United Nations’ latest report on climate change, CBS Evening News led with this:

Another inconvenient truth has emerged on the way to the apocalypse. The new UN report on climate change is expected to blame man-made greenhouse gases more than ever for global warming. But there’s a problem. The global atmosphere hasn’t been warming lately.

Wow. Juicy stuff – except that Mark Phillips goes on to explain that temperature increases have shifted for the moment to the oceans, and that the UN report was its most apocalyptic to date. Yet, immediately after debunking his own premise, he twice trots out a prominent climate-change skeptic (with no climate-science training) named Benny Peiser and identifies him only as director of a “thinktank”. Never mind that his Cambridge Conference Network thinks mainly that climate “debate” is bogus.

Needless to say, the conservative media jumped all over this liberal media vindication of climate denialism. “CBS Stunned By Climate Change ‘Inconvenient Truth,” headlined CNSNews.com, propaganda organ of the Media Research Council, a founding member of the Vast Rightwing Conspiracy.

On the other hand, denialism is a time-honored tactic to coalesce the haters. In spite of millions of eyewitnesses and archives full of documentation from the perpetrators – not to mention, film footage of the victims – there is no shortage of prominent personages, from David Irving to Mahmoud Ahmadinejad‎, who have earned global attention by questioning history. I am pleased to report that, in this rare instance, the press continues to treat them as dangerous wingnuts, and never invokes them for an opposing view on history.

But why? Is it because 6 million murders are more real than legislative intransigence or fossil records or melting ice caps? Or just that some truths carry less political risks than others?

Do the math. Just don’t worry too much about where you put the = sign.