By Roger Jones, Victoria University, via The Conversation 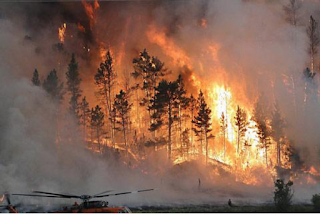 With fires still burning across New South Wales, it’s time to have a look at the role climate change might have played. Are the conditions we’re seeing natural variation, or part of a long term trend?

In fact, it doesn’t have to be one or the other.

Has bushfire risk increased due to climate change?

In research I did with colleagues earlier this year we looked at the Fire Danger Index calculated by the Bureau of Meteorology, and compared how it changed compared to temperature over time in Victoria.

South-east Australia saw a temperature change of about 0.8C when we compared temperatures before 1996 and after 1997. We know that it got drier after 1997 too.
We then compared this data to the Forest Fire Danger Index, to see if it showed the same pattern. We analysed fire data from nine stations in Victoria and did a non-linear analysis.

We found that fire danger in Victoria increased by over a third after 1996, compared to 1972-1996. The current level of fire danger is equivalent to the worst case projected for 2050, from an earlier analysis for the Climate Institute.

While it’s impossible to say categorically that the situation is the same in NSW, we know that these changes are generally applicable across south-east Australia. So it’s likely to be a similar case: fire and climate change are linked.

What is “non-linear” change?

When you analyse long historical time series of temperature, plus climate change from modelled data, it actually goes up like a staircase. The “El Niño of the century” we saw in 1997-98 was one of these steps in the staircase.

It’s physically impossible for climate change to be entirely gradual, and for natural variability to act independently of that. That’s like saying that some of the heat in the atmosphere is climate change heat, and some is variability heat, and that they behave differently.

This also relates to the so-called hiatus. This hiatus is normal, and what we’d expect from a climate that evolves in a non-linear manner.

The models do predict these steps, even if some people claim they don’t. Model data shows periods up to 20 years when there is little or no increase in warming.

What’s happened to temperature and rainfall in south east Australia?

Temperature can also be analysed through step changes. Before and after 1996, maximum temperatures went up 0.8C. We can actually date the change to October 1996, when the El Niño started.

Minimum temperatures have changed in a couple of periods. The first is the late 1960s early 1970s, then again in 1996-1997. In fact global temperatures went up in that period too, by about 0.3C at the same time.

Rainfall decreased in south-east Australia, and this decrease continued until 2009-2010. Then we got a massive negative Indian Ocean Dipole and La Niña, resulting in record rainfall and flooding. In southern Victoria it’s been quite moist since, but north of the Great Dividing Range it’s dried out very quickly.

These changes in rainfall and temperature are interrelated. It’s a combination of climate change and climate variability. The warming component, which is non-linear, is climate change.

What about the weather?

We can only blame weather conditions on climate change if they are part of a statistically significant pattern. If we see anomalously high temperatures – knowing that there is an anthropogenic component to temperature increases – then there’s definitely an anthropogenic warming component in that.

Because the damages tend to be non-linear as well, it means the risk is magnified. So the anthropogenic component of the temperature increase magnifies the impacts or the severity of the impacts.

Why are we so reluctant to talk about climate change?

This isn’t my line, but someone said on Monday, “there’s never a good time to talk about gun control”.

Of course when people are hurting and in strife you’ve got to be sensitive to their needs. But after these events we have to seriously think about how we’re going to manage them in the future.

We can’t consider severe fires as one-offs that happen every few decades. If they’re becoming a systemic part of our environment we have to consider this really seriously.

There will be a financial cost and a human cost, and we will see it repeated, if we don’t plan ahead.

This article was originally published at The Conversation.