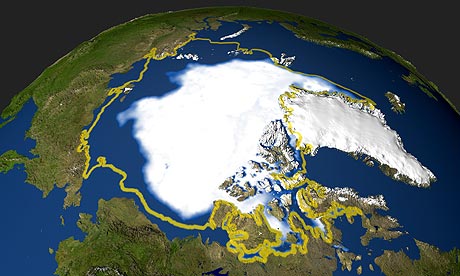 As humans put more and more heat-trapping gases into the atmosphere, the Earth’s climate changes; we all know that. Some of the trickier questions are, how fast is it changing, what can we expect in the future, what are the costs of slowing emissions (compared to the costs of doing nothing), and what changes are we already observing that give us such confidence in our predictions?

Perhaps the poster child of climate change is in the Arctic, where sea ice has been declining at an astonishing rate. Over the past few decades, satellite information has been gathered which shows huge declines in ice extent (the area covered by ice). The declines are enough that it is possible that in a few years, there will be little or no ice left in the Arctic at the end of the melt season.

For climate nerds like me, internet bookmarks are essential for organizations like the National Snow and Ice Data Center (NSIDC) or IARC-JAXA which provide updated and high-quality information about Arctic conditions. 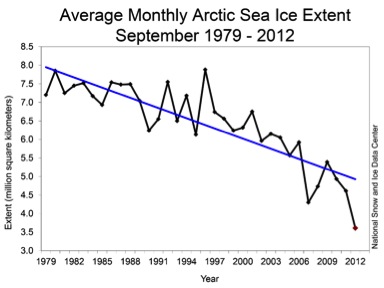 Summer Arctic ice extent, National Snow and Ice Data Center.While these institutions gather and make available important Arctic information, a wider community has taken a very active role in interpreting the data. These “armchair” scientists play a particularly important role in telling the rest of us what the data actually means for our future.

Perhaps the best example is the Arctic Sea Ice blog which was started in 2010 by Neven, a 38 year old freelance writer who set up the blog to draw more attention to the Arctic and create a central place for the exchange of information and ideas concerning Arctic sea ice. He also set up the Arctic Sea Ice Graphs website that is a collection of graphs, maps and other pieces of information regarding Arctic sea ice, and he formed a forum to allow community discussion.

Neven, like many other armchair scientists has little formal training. But, he makes up for that with a doggedness that would impress anyone. While he describes his blog as basically weather reports, many publishing researchers turn to him for a comprehensive view of current conditions. Do you want to know what the short term ice conditions will likely be? Ask Neven. Interested in learning about impacts of current conditions on the atmosphere? Ask Neven.

Not only is he a great resource, but the commenters provide insightful thoughts as well. And very often, they are not in agreement with each other. It is refreshing to see people engage in polite yet candid discussions of various views of our Arctic. 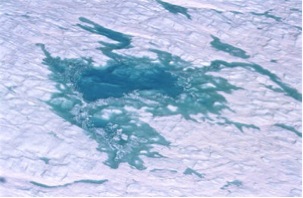 Ice sheet melt pond – John Maurer NSIDCSo, what is the view of the current Arctic conditions? Well, let’s hear from Neven himself.

“So far the 2013 melting season hasn’t been as spectacular as 2012 because of a slow start to the melting season, where a persistent cyclone kept the Arctic cold and cloudy for several weeks in a row. Right now, it doesn’t look like the 2012 records will be broken, but there are a few known unknowns out there that might change all that. For instance, a large patch of low concentration ice near the North Pole.

Either way, we’re going to learn something from this melting season, like how important a fast/slow start to the melting season can be in this new regime where most of the ice pack consists of thin first-year ice. The weather used to be the dominant factor in determining how low the minimum would turn out. It still is dominant, but the thinning of the ice pack has reduced its importance. In other words, ice thickness decides how dominant the weather can be.

If it turns out that a slow start to the melting season results in a recovery of sorts, and we have a couple of those in a row (which I think is highly unlikely), we could return to the pre-2007 situation. But just one bad year would probably throw the ice pack back to where we are now: a state where a fast start to the melting season, and prevailing conditions that are conducive to melt lead to a virtually ice-free Arctic in September.

I personally believe this could happen before the decade is out, but it still depends on the circumstances. We haven’t reached the stage yet where an ice-free September is a done deal. Things rarely are certain in the Arctic. There even could be some unforeseen negative feedback kicking in and (finally) slowing things down, but that’s not something I would bet the farm on.

What’s important to remember, is that even if not ice-free, the situation is already very, very bad, and it’s not unreasonable to think that we have started to experience the consequences of the loss of Arctic sea ice so far. Organizations like Greenpeace tell us that we need to save the Arctic. And even though the Arctic is the most important place in the world right now (IMO), it’s not about saving the Arctic, it’s about saving ourselves.”

People like Neven, who can provide clear descriptions to the larger public are doing a great service. This is particularly so because scientists who are employed at major research institutions are often not trained in communication and such activities are not rewarded. I view these complementary activities and viewpoints an exciting development in the larger conversation about climate change.