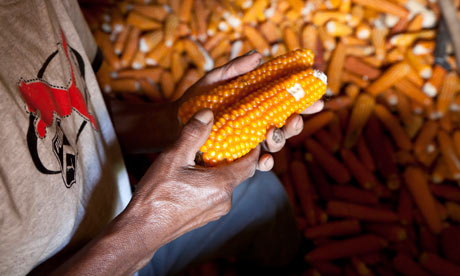 If the world is to grow enough food for the projected global population in 2050, agricultural productivity will have to rise by at least 60%, and may need to more than double, according to researchers who have studied global crop yields.

They say that productivity is not rising fast enough at present to meet the likely demands on agriculture.

The researchers studied yields of four key staple crops – maize, rice, wheat and soybeans – and found they were increasing by only about 0.9% to 1.6% a year. That would lead to an overall increase of about 38% to 67% by 2050, which would only be enough to feed the population if the lower end of the estimate of yields needed and the maximum yield increase turns out to be the case.

It also does not take into account other factors, such as climate change, which the World Bank said this week could lead to massive food shortages in many areas as soon as the 2030s.

The study’s findings are also likely to fuel debate over the efficacy of genetically modified crops, which some scientists have argued may be needed in future to feed the rapidly growing global population, which is expected to reach at least 9 billion by 2050.

Deepak Ray, who led the new research, said that some countries were faring far worse than others. For instance, in Guatemala, the productivity of the maize agriculture is declining, while the population is growing.

The slow increase in agricultural productivity around the world stands in marked contrast to the “green revolution” that led to a huge increase in crop yields in Asia in the 1960s to 1970s, with the widespread use of new artificial fertilisers, pesticides and growing techniques. The green revolution enabled high population growth and sparked unprecedented economic growth in many Asian countries. Signs that its effects have petered out could be a warning that future population growth may be harder to accommodate.

There is also a danger that large swathes of pristine land — including forests — could be cleared for agriculture to compensate for the slow growth in yields, with potentially damaging effects on the climate and on ecosystems. Fertile agricultural land is at a premium in most countries, and overuse, water scarcity and soil degradation are taking further tolls.

However, the authors of the study only examined crop yields — they emphasised that there should be other ways to improve the world’s food supply, including increasing efficiency and cutting the massive waste of food that takes place in both developed and developing countries.

Jon Foley, co-author of the paper, said: “Clearly, the world faces a looming agricultural crisis, with yield increases insufficient to keep up with projected demands. The good news is, opportunities exist to increase production through more efficient use of current arable lands and increased yield growth rates by spreading best management practices. If we are to boost production in these key crops to meet projected needs, we have no time to waste.”