Has the Republican Party stopped denying climate science, and will they begin participating in the solutions?

Has the Republican Party stopped denying climate science, and will they begin participating in the solutions?

Following President Obama’s climate plan, the answers appear to be yes and no, respectively 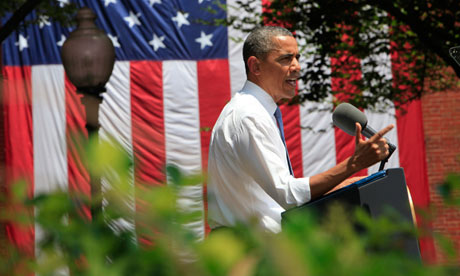 Given that nearly 70 percent of Republicans in Congress and 90 percent of the party’s congressional leadership deny the reality of human-caused global warming, you might expect them to attack President Obama’s climate plan on scientific grounds. On the contrary, Republican politicians have critiqued President Obama’s plan almost entirely on the economics. Even Senator James Inhofe, who wrote an entire book based around the absurd premise that “global warming is the greatest hoax ever perpetrated on the American people,” did not even touch upon climate science when responding to the climate plan.

This is a fascinating turn of events. Perhaps Republican politicians have decided that disputing the consensus of 97% of climate research and climate experts is a losing proposition. Whatever the reason, the shift away from science denial toward the economics debate is a welcome one. As even the right-wing Washington Times admitted, remaining entrenched in climate science denial has prevented the Republican Party from becoming involved in discussions about the best way to reduce greenhouse gas emissions with the least impact on the economy.

As a result, President Obama was forced to enforce government regulation of greenhouse gas emissions, using a stick because Congress has been unable or unwilling to solve the problem with a carrot. Putting a price on greenhouse gases would create the incentive for consumers to lower their emissions, thus creating demand for innovative new green technologies. Government regulations can only penalize the worst polluters.

It’s important to note that while carbon pricing is preferable to government regulations from an economic standpoint, Republican claims that these regulations will kill jobs and cost huge sums of money are without merit. Since the greenhouse gas regulations have not yet been developed, we can’t estimate their costs. However, construction of new low emissions power plants would create jobs, and every dollar invested in clean energy creates two to three times as many jobs as putting that same dollar into coal energy. Estimates of the costs of environmental regulations are almost always exaggerated, and so far, alarmism about the costs of these greenhouse gas regulations appear to be no exception.

There’s also very little Republicans can do to stop these regulations. The US Supreme Court ruled in 2007 that as long as they endanger public health or welfare (which they do), greenhouse gas emissions must be regulated under the Clean Air Act. With Democrats in control of the Senate and Presidency, efforts to undermine this Supreme Court decision via congressional legislation have no chance of passage.

Republicans can try to score political points by criticizing President Obama for enforcing the law, but polls show that 70 to 87 percent of Americans support these greenhouse gas regulations, and even coal-heavy energy utilities appear to support them. So what other options does the Republican Party have?

Quite simply, they can work with Democrats to craft climate legislation that would put a price on greenhouse gas emissions and replace the government regulations. Economists generally agree that this market-based approach would be even better for the economy.

Cap and trade was originally a Republican idea as an alternative to government regulations of pollutants under the Clean Air Act. However, many political conservatives have been rallying around a simpler carbon tax approach. Although the Koch brothers managed to persuade a majority of congressional Republicans to sign a pledge to “oppose any legislation relating to climate change that includes a net increase in government revenue,” a revenue-neutral carbon tax wouldn’t violate that pledge.

British Columbia implemented a revenue-neutral carbon tax system in 2008, to great success thus far. By offsetting the carbon taxes with decreased income taxes, British Columbia has the lowest personal income tax rates in Canada for incomes of less than $120,000 per year. Their greenhouse gas emissions have dropped faster than the rest of Canada, while their economy has done a bit better than the national average. Public support for the tax is at 64 percent and growing.

In short, while regulating greenhouse gas emissions is an important and positive step, there are better alternatives available. But those alternatives require congressional legislation, which in turn requires that Republicans work with Democrats. Given that Congress is so dysfunctional that it could not pass gun background check legislation despite 90 percent public support, or a farm bill, climate legislation seems a tall order.

Nevertheless, the options before Congress are to live with government greenhouse gas regulations, or pass climate legislation. Will Republicans begin to once again participate in crafting climate solutions, as some of them did as recently as 2010? If they so strongly object to President Obama’s greenhouse gas regulations, will congressional Republicans be capable of doing their jobs and coming up with a better solution?

It may take a few years for Congress to become sufficiently functional to tackle this problem. The good news is that until that happens, government greenhouse gas regulations will begin to reduce American emissions, and there is a growing push among conservatives for Republican policymakers to once again become constructively engaged in solving the climate problem with the maximum economic benefit. With the planet continuing to warm and the climate continuing to change, it’s only a matter of time until Republicans are forced to step up to the plate and offer constructive solutions to the problem.