Help us say goodbye to coal

Help us say goodbye to coal

In case you hadn’t heard, the Australian Coal Association (ACA) disbanded last week and their CEO Nikki Williams (who characterized Bill McKibben as a “threat to our economy”) has lost her job.

A sign of decline, this is also a last-ditch effort by the industry to consolidate its power. In being absorbed by the Minerals Council, the ACA’s lobbying power will be centralised and it’ll be harder to tell what they’re up to. 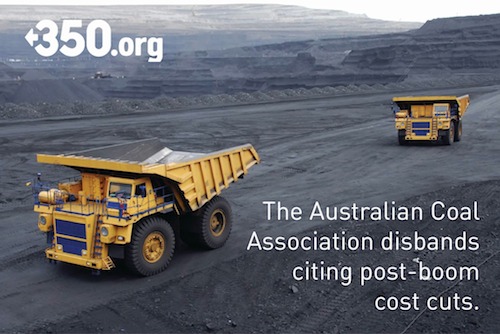 But, as the coal industry starts to wane, it’s critical that we keep them in the spotlight. That’s why, as we approach the season where companies hold their Annual General Meetings (AGM), we’re joining forces with friends in the climate movement to pressure the big banks and fossil fuel companies to come clean.

If you’re someone with shares or simply someone who cares – we need you. Click here to volunteer to ask questions or attend actions during this year’s AGM season

We’ll be shining a light on fossil fuel investments and asking how investors plan to exit an industry that is playing havoc with our communities, ecosystems and the climate.

And we have the numbers on our side…

But, as Gandhi reminds us, a win seldom comes without a fight. Over the coming months, the industry will be lobbying hard to undermine Government regulation.

That’s why we need you to help us expose the absurdities of expanding an industry that, increasingly, can no longer be financially and morally justified.

We’ll help draw public attention to damaging new projects through our Summer Heat campaign. We’ll work hard to erode the industry’s social license through our divestment campaigns. And from October through to December, we’ll go direct to the heart of the industry – by putting the hard word on fossil fuel companies and investors during the upcoming AGM season.

A clean energy future is within our reach.

Join us this AGM season to help farewell coal and welcome in that beautiful, clean and safe future we all deserve.

350.org is building a global movement to solve the climate crisis. Connect with us on Facebook and Twitter, and sign up for email alerts. You can help power our work by getting involved locally, sharing your story, and donating here. To change your email address or update your contact info, click here.