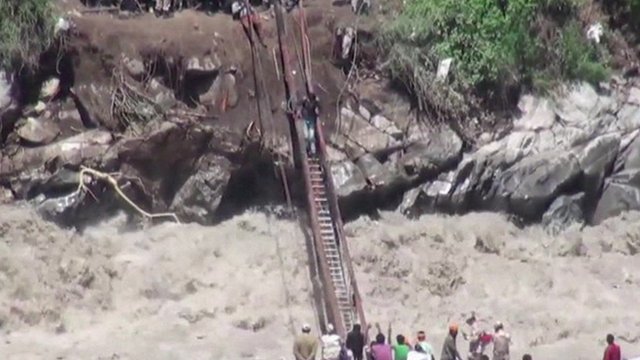 The death toll in flash floods and landslides in northern India could climb to 1,000, officials have warned.

More than 600 people are confirmed dead with more than 40,000 still said to be stranded in the mountains of Uttarakhand state.

Survivors are being airlifted from the worst-hit areas and special trains are also carrying people to safety.

Search and rescue efforts have been stepped up as more downpours are expected.

Early monsoon rains in India this year are believed to be the heaviest in 60 years.

The army was fabulous, they helped us so much. They even carried people across in their arms and they are helping us out till now”

He has also denied a claim by Indian Home Minister Sushil Shinde that the rescue effort had lacked co-ordination.

Meanwhile, officials said that the severely damaged Hindu temple town of Kedarnath had now been cleared of survivors and teams were searching for the bodies of victims.

The BBC’s Nitin Srivastava in the city of Rishikesh says the biggest problem for rescue workers is the difficult mountainous terrain and the continuing poor weather.

Tourists and pilgrims were among those caught up in the floods, which washed away homes, roads and bridges.

Many of those affected by the floods are accusing the government of neglect. Friends and relatives of those still missing have been protesting outside government offices, our correspondent adds.

One woman who was rescued by army helicopter said she had walked at least 25km (15 miles) trying to escape the floods.

“The army was fabulous, they helped us so much. They even carried people across in their arms and they are helping us out till now, but the government did not do anything to mitigate our problems,” said Malika Devi, quoted by Reuters.

Government officials say more than 33,000 people have already been rescued from the worst-hit areas over recent days.

Many survivors have been evacuated to the state capital Dehradun, where relatives of those still missing are awaiting news.

Dehradun is also the base for the relief effort, from where rescue workers, medicines and food are being flown to the affected areas.

The rainy season generally lasts from June to September, bringing rain which is critical to farming.

Are you in the region?