IPCC report makes US meteorologist cry – and give up flying

IPCC report makes US meteorologist cry – and give up flying 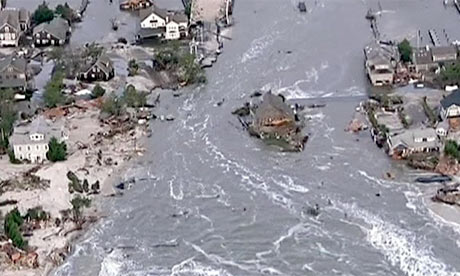 An ariel view of flooding caused by hurricane Sandy in New Jersey. Meteorologist Eric Holthaus has been flooded with email about how individuals should respond to climate change. Photograph: guardian.co.uk

A meteorologist who broke down in tears, mused about a vasectomy, and vowed to give up air travel in the wake of the blockbuster report from the UN’s Intergovernmental Panel on Climate Change (IPCC) has found himself at the centre of a storm about personal responses to climate change.

Since his emotional musings on Twitter, meteorologist Eric Holthaus has been flooded with email about how individuals should respond to climate change.

Some were openly hostile. “I’ve had a couple hundred people send emails or tweets that said: ‘if you really want to reduce your carbon footprints why not commit suicide’?” Holthaus told the Guardian. But others were supportive of the no-fly pledge, saying they were inspired to give up meat, or take other carbon-cutting actions.

Holthaus, who gained a large following during hurricane Sandy, estimates he flew 75,000 miles last year, much of that to Ethiopia where he is involved in a climate project.

He has followed climate change for years, as a blogger for the Wall Street Journal and now at Quartz.

But he said he was overwhelmed by the IPCC pronouncing for the first time that humans were now only decades away from being locked into a course of dangerous climate change. He also despaired at the inertia in UN climate talks, which are unlikely to produce global action before 2020.

On his way home from San Francisco, Holthaus tweeted: “I just broke down in tears in boarding area at SFO [San Francisco airport] while on phone with my wife. I’ve never cried because of a science report before.”

Two minutes later, Holthaus tweeted again: “I realised, just now: this has to be the last flight I ever take. I’m committing right now to stop flying. It’s not worth the climate.”

He said: “It felt like a hopeless moment to me to be completely honest. At that moment it hit me, as a citizen of the planet and as a human, not as a scientist.

“In the absence of a global coordinated carbon policy, I think it is going to be up to individuals, cities, and corporations to take action.”

In his case, Holthaus said flying was by far the largest source of carbon emissions. Much of it was for work, but he also flew from his home in Wisconsin to holidays in Tanzania and California. He realised his carbon footprint from flying far outweighed his savings from sharing a car, recycling, or giving up meat.

“I was thinking the flying was all for a good cause. It is not going to matter but I think that kind of thinking is dangerous when we are at the global tipping point,” he said. “When I saw I could reduce my carbon footprint with one action, for me it was a step I was willing to take.”

Did Holthaus go too far? Fox News, predictably, in a segment this week labelled him a “kook” and said the “meteorologist’s meltdown” discredited climate science.

Andrew Freedman, who writes at Climate Central, said on his Twitter feed that while he respected Holthaus’s work: “I wonder if his overall reaction to the #IPCC report hurts his ability to credibly report on #climate.”

But Holthaus said he could live with the criticism.

“Is my credibility increased or reduced? I don’t know but I would argue that I am talking from a stronger standpoint now that I am practicing what I preach a little more,” he said.

And he does not entirely rule out getting on a plane again one day. “Let’s say, heaven forbid, my mother was in a car accident and I needed to be in hospital today. Of course I would fly,” he said. “I don’t have any plans to ever fly again but if there was an emergency like that than I would. My point is that there is a lot of discretionary travel by airplanes that produces a lot of emissions, whether people are taking vacations or business travel.”

The most important environment stories each week including data, opinion pieces and guides.