If I were the president, I could stop terrorist attacks in a few days. Permanently. First apologize to all the widows and orphans, the tortured and impoverished, and all the many millions of other victims of American imperialism. Then announce, to every corner of the world, that America’s global interventions have come to an end, and inform Israel that it is no longer the 51st state of the USA but now — oddly enough — a foreign country. Then reduce the military budget by at least 90% and use the savings to pay reparations to the victims. There would be more than enough money.  One year’s military budget of 330 billion dollars is equal to more than $18,000 an hour for every hour since Jesus Christ was born.  That’s what I’d do on my first three days in the White House.  On the fourth day, I’d be assassinated.

Because the subtropical regions support conditions conducive for arid climates, deserts will march northward into more densely-inhabited regions. Under continued fossil-fuel burning, the Sahara Desert leaps across the Mediterranean and fully expands into southern and central Europe.

Climate Zones Everywhere are on the March Poleward

In many drought-ravaged areas, there’s not been sufficient water for tree roots to siphon. Weakened needle-covered trees are unable to secrete the sticky resin required to fight off bark beetle infestations. Mild winters also don’t kill off as many of the bugs, which burrow beneath bark and into the tree’s soft innards on which their larvae feed.

Rainforests are now being hit so hard by a combination of drought and fire that the forest is starting to bleed carbon back. This gigantic and ancient repository of atmospheric carbon appears to have turned into a carbon source.

A spate of real-time clocks – watch the numbers

93.4% of global warming goes into oceans. 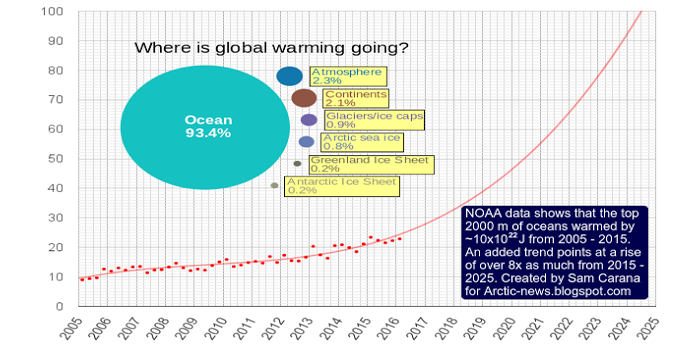 Turkey: Failed Coup or Paradigm Shift in the Middle East – in the World?

This botched coup is BIG; much bigger than the mainstream media are making the west believe. It could definitely and irreversibly tilt the balance of power in the MENA Region,By looking closer, a failed CIA-Mossad-MI6 coup is perhaps the most realistic scenario. It appears that Russia played a crucial role in having the audacious and ill-prepared coup fall apart. thanks to Vladimir Putin’s timely warning and the angry people in the streets hilariously climbing on to circulating tanks

Now that the dust is settling in Turkey, the magnitude of the damage to what is left of Turkish democracy is becoming clearer. More than 10,000 people have been arrested and close to 70,000 people have been fired from the military and civilian bureaucracy. Almost one third of the flag officers in the Turkish armed forces have been dishonorably discharged. The arrests and firings are still continuing, with no end in sight for the most unprecedented wave of mass purges in the history of the Turkish Republic.

Erdogan was aware of the growing power of the Gulenists and their growing links to Washington.  Erdogan moved decisively  and successfully, to pre-empt the Gulenist power grab by forcing a premature coup.

An Updated Version Of The “Peak Oil” Story

The attempt by governments to fix the oil shortage problem didn’t really work. Instead, it led to the opposite mismatch from the one we were expecting. We got an oversupply problem–a problem of finding enough space for all our extra supply 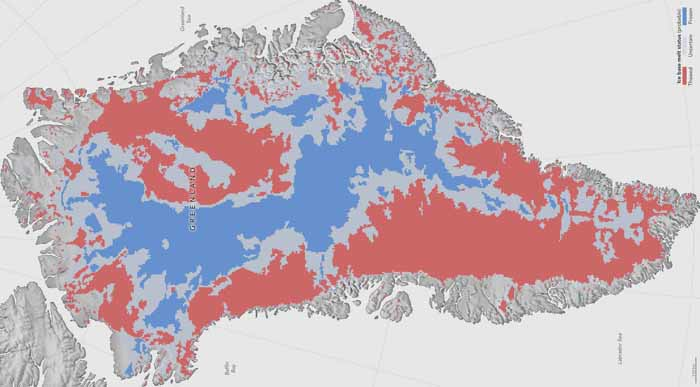 Does Wikileaks Have The Email That Will Put Hillary Clinton in Prison? There is an extremely well-documented pattern of when Hillary Clinton was secretary of state, those people, companies, governments, who wanted a decision by the secretary of state in their favor, made large donations to the Clinton Foundation or in some other cases made business deals with people around Hillary Clinton. One particular instance is the approval by Secretary Clinton of selling 20 percent of the US-Iranian reprocessing rights to a Russian company to be exported to Russia. At that time, a large donation was made by those Russian interests to the Clinton foundation.”

In late June, due to glaciers melting at unprecedented rates, the side of a mountain nearly a mile high in Alaska’s Glacier Bay National Park, which had formerly been supported by glacial ice, collapsed completely. The landslide released over 100 million tons of rock, sending debris miles across a glacier beneath what was left of the mountain.

Humans are gobbling up natural resources at a terrifying rate

It found that, from the food we eat to the homes we live in to the fuels we burn, our rates of consumption has more than tripled in the past 40 years.

Ecuador’s Correa: It’s Neoliberalism, Not Socialism That Has Failed

database of 3,116 cities provided by AccuWeather, about 90 percent of them were warmer than normal. Enter your city in the field below to see how much warmer it was last year.

it would appear that they’re proposing to drill right in the middle of the marine park. BP wants to drill four exploration wells up to 2.5 kilometres deep

Nuclear Power Is Losing Money At An Astonishing Rate

Half of existing nuclear power plants are no longer profitable. The New York Times and others have tried to blame renewable energy, but the admittedly astounding price drops of renewables aren’t the primary cause of the industry’s woes — cheap fracked gas is.

The Purse is Mightier Than the Pen

The climate crisis is here, now, but a compromised, corrupted media doesn’t want us to know.

Based on our analysis and comparison to other works, we suggest the portrait is of the model Emma Dobigny