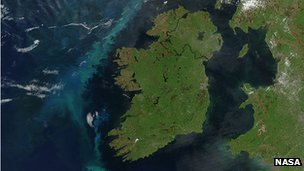 Plant plankton blooms in the ocean can be seen from space.
Continue reading the main story

In Nature Communications, researchers report regional iron variations in the oceans of up to 10,000 times.

This observation is expected to improve ocean-climate models.

Photosynthetic life is limited by low availability of iron in as much as one third of Earth’s surface oceans. The problem for phytoplankton is particularly acute around the Southern Ocean.

Dr Will Homoky, lead author of the paper by teams at the Universities of Southampton and South Carolina, said: “Iron acts like a giant lever on marine life, storing carbon. It switches on growth of microscopic marine plants, which extract carbon dioxide from our atmosphere and lock it away in the ocean.”

In separate studies, scientists have previously added iron to the ocean in iron-limited areas, which typically generates large blooms of phytoplankton. This has been suggested by some as a possible geoengineering solution to capture carbon from the atmosphere and transfer it to the ocean.

It remains unclear what the fate of phytoplankton carbon, at the base of the food chain is, however, and the role of iron for fertilising the oceans is a developing field of research.

The key to understanding these variations is now to understand how elements mix into the surface of the ocean, and how this in turn changes ocean life and potentially locks up atmospheric carbon dioxide.