Study – based on satellite measurements – among first to estimate the thickness of the Arctic ice, rather than surface areas 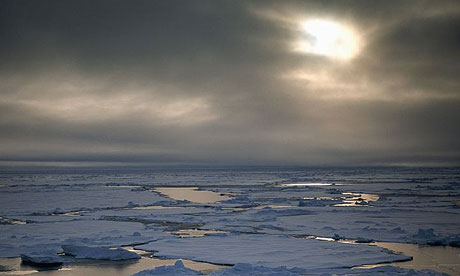 Arctic sea ice has thinned by more than 40% since 2004. Photograph: Galen Rowell

The Earth is going thin on top. A new study has revealed that the Arctic Ocean’s permanent blanket of ice around the North Pole has thinned by more than 40% since 2004. Scientists said the rapid loss was “remarkable” and said it could force experts to reassess how quickly the Arctic ice in the summer may disappear completely. They have called for more research to pin down the causes of the change, which they say is probably down to increased melting and shifts in the way the ice moves around.

The study, based on satellite measurements, is among the first to estimate the thickness of the Arctic ice, rather than just its surface area.

Ron Kwok, senior research scientist at Nasa’s Jet Propulsion Laboratory in California, said: “Even in years when the overall extent of sea ice remains stable or grows slightly, the thickness and volume of the ice cover is continuing to decline, making the ice more vulnerable to continued shrinkage.”


The study looked at measurements taken of the Arctic region by the ICESat satellite, launched in 2003.

Overall, the experts found that the ice, typically up to about 3m thick, thinned by 67cm over the last four winters.

Converting to ice volume, the scientists worked out the amount of so-called multiyear ice, which persists through Arctic summers, had decreased in the winter by up to 6,300 cubic kilometres since 2005 – a decline of more than 40%. The research is published in the Journal of Geophysical Research: Oceans.

Kwok said: “Ice volume allows us to calculate annual ice production and gives us an inventory of the fresh water and total ice mass stored in Arctic sea ice. Our data will help scientists better understand how fast the volume of Arctic ice is decreasing and how soon we might see a nearly ice-free Arctic in summer.”

The Arctic ice cap fluctuates with the seasons, growing in the freezing winter and shrinking over the summer. An important finding of the study is that the majority of Arctic ice no longer survives the summer. In 2003, this multiyear ice made up 62% of the region’s total ice volume. By 2008, this was down to 32%. The remaining 68% was “first-year” seasonal ice, which was open water during the summer, so is thinner and more likely to melt away.

Earlier this year, scientists warned that sea ice volume reached a record low in 2008 due to an unusually high proportion of the thinner first year ice.