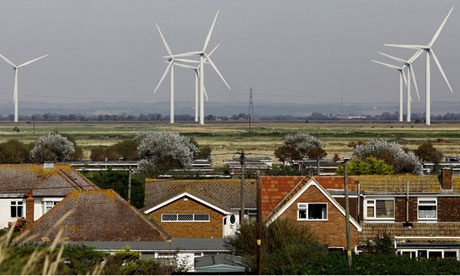 The Department for Communities and Local Government (DCLG) today issued new planning guidance, which stressed that the need for renewable energy “does not automatically override environmental protections and the planning concerns of local communities”.

The guidance is designed to help officials interpret the National Planning Policy Framework (NPPF), published last year, which encourages the development of renewable energy projects to meet a national target for 15 per cent of the UK’s energy to come from renewable sources by 2020.

Announcing the new guidelines today, Communities Minister Baroness Hanham said some communities have “genuine concerns” that planning officers are failing to give enough weight to local environmental considerations like the impact on landscape, heritage sites, and “local amenity”, when considering planning applications for wind turbines or solar arrays.

“Our new planning practice guidance will help decisions on green energy get the environmental balance right in line with the framework,” she said. “Meeting our energy goals should not be used to justify the wrong development in the wrong location.”

The guidance was welcomed by trade association RenewableUK, which noted that the new document would not only provide greater policy certainty for developers but would also block proposed “buffer zones” around properties.

Maf Smith, deputy chief executive of RenewableUK, said the guidance highlighted the need to balance a range of environmental concerns when planning a new development.

“Following a long debate about onshore wind costs and benefits, we trust that this period of uncertainty for the industry is now at an end, and that we will see planning policy and guidance producing robust, objective planning decisions,” he said.

But Friends of the Earth’s planning campaigner Naomi Luhde-Thompson slammed the government for diluting the requirement for councils to consider their responsibility for delivering renewable energy capacity when considering planning applications.

“It’s staggering that the minister has refused to insist on councils playing their part in developing renewable energy goals – unless everyone takes urgent action, the UK will fail to meet its targets for slashing emissions,” she said.

More from Guardian Environment Network on