Oil exploration: too high a price

Oil exploration: too high a price

Deepwater may cost BP $40bn in damages, but the oil industry hasn’t learned its lesson 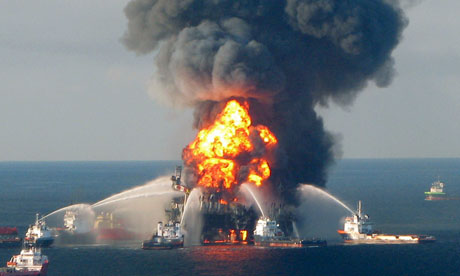 As a symbol of the extremes the world is prepared to go to feed its addiction to oil, the biggest and most complex civil trial in history is a blazing one. On Monday, barring a last minute settlement, BP and its partners in the Deepwater Horizon oil disaster will face 120,000 individuals who lost their livelihoods, plus the US federal government and states of Louisiana and Alabama. There are $40bn of damages and penalties at stake.

But has the race to the bottom of the oceans and the ends of the Earth in search of oil and gas slowed in the face of such colossal legal and financial risk? It has barely checked its step.

This is a story of superlatives. With unknowing hubris, Transocean, the owner of the Deepwater Horizon rig, trumpeted its world-record drilling depth of almost seven miles in September 2009. “Congratulations to everyone involved,” said CEO Robert Long at the time, noting the “intensive planning and focus on effective operations by BP and the drilling crews”. Just seven months later catastrophe struck: 11 men died and the US had its worst ever offshore oil spill on its hands.

Yet, after a brief pause, business has not just returned to normal in the Gulf of Mexico, but been turbo-charged. There are now 39 oil rigs operating in its deep seas, about a third more than before the Deepwater disaster. Elsewhere, exploration has surged further and deeper into the oceans. Five months after Deepwater erupted, the Brazilian oil giant Petrobras achieved another superlative, the world’s largest-ever share offering, which raised $67bn to fund its exploitation of the vast, deep and ultra-deep oil fields off its coast. But even this is not the region that has analysts bubbling with most excitement. Africa’s west coast, from Angola to Congo to Nigeria, has the world’s richest fields.

These contributions to the world’s fuel tanks will be topped up by a list of places that reads like a brochure for adventurous travellers – Egypt, Indonesia, Equatorial Guinea, the Phillipines, India and Mauritania – as well as the UK’s own fields in the deep blue off Shetland and perhaps the Falklands. While the Deepwater plaintiffs’ 340 lawyers and their opponents prepare to tackle 72m pages of evidence in a New Orleans court room, the world’s reliance on oil from miles under the sea also piles up. A fifth of all offshore oil is now dredged from the depths and this is expected by the industry to rise to over half by the end of the decade and two-thirds by 2030.

At this point I hope you are wondering why the world appears content relying for oil – its economic lifeblood – on extraordinary feats of engineering performed in ever-more extreme locations on Earth. If you weren’t, consider the march northwards into the Arctic, the harshest and most fragile environment on the planet, led by Norway.

The reason for this calm reliance on everyday technical miracles is, unlike the Deepwater court case, devastatingly simple: it is still cheap. Despite costing between four and eight times more to pump up than onshore oil, oil from the depths remains highly profitable. Global oil prices are being driven hard by the people from Beijing to Bangalore getting behind the wheel, with the number of cars on the world’s road expected to double to 1.7bn in 20 years. It is not impossible that plumbing the depths will become a little less attractive if BP, Transocean and the others emerge from their legal labyrinth with a bill of $40bn. But would oil majors really be held to account for disasters in the same way by nations whose GDP is dwarfed by the companies’ wealth? I think not.

Deep water drilling is a hostage to fortune in the short term, especially in locations lacking the resources of the US to clean up and the good fortune of the balmy Gulf waters to degrade spilt oil quickly. In the long term, we will run out of space in the atmosphere for climate-warming carbon dioxide well before we run out of oil and gas. But if money is fuelling the submarine adventuring of ExxonMobil, Shell, BP, Chevron and others, money might just curb it too. The colossal global subsidies for fossil fuels – at least half a trillion dollars in 2010 – are starting to look vulnerable. The UN, G20, International Energy Agency and Barack Obama would all like to torch them, with Obama stating this month: “We need to end the subsidies for oil companies and double down on clean energy.”