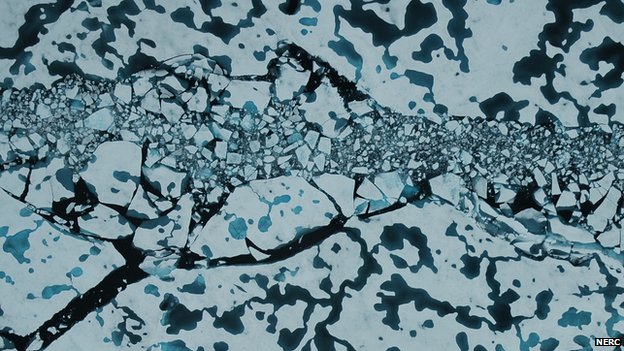 As the sea ice melts, ponds of water collect on top of the floes
Continue reading the main story

A UK team believes it can now make skilful predictions of how much sea ice will melt during Arctic summers.

The scientists say the amount of water ponding on top of the floes as they warm in the spring has been shown to be an excellent indicator.

Using their technique, the Reading University researchers reckon the minimum ice extent this September will be about 5.4 million square km.

It is about the same as at the end of the melt season last year.

The floes in the far north are the subject of intense study currently because of their rapid summer decline.

But the year-to-year variation is large and the computer models in general have failed to capture the behaviour.

Dark cover”The sort of three-month prediction we’re making would be useful for people who need to do operations in the Arctic, such as shipping companies for navigation purposes,” explained Prof Daniel Feltham, who leads the NERC Centre for Polar Observation and Modelling team at Reading. 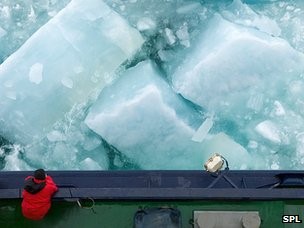 Prof Feltham and colleagues have found a strong correlation between the fraction of the floes covered by pond water in May and the eventual sea-ice extent seen in September.

The physical link is the change in reflectiveness, or albedo, brought about by the standing water.

The ponds are darker than bare ice and therefore absorb more of the Sun’s energy, promoting further melting.

Prof Feltham’s team has developed a model to forecast the evolution of melt ponds in the Arctic and has incorporated this into more general climate sea-ice models.

The team published its ideas in a recent edition of the journal Nature Climate Change.

Southern differencesNow, it has put out its first open forecast for this September of 5.4 million square km, give or take half a million.

“What could knock our prediction off course? Weather conditions, certainly. If we have anomalously cold conditions, we would expect the ice extent to be higher; or if we had very stormy conditions, like they did in August 2012 – that could diverge the ice and encourage more melting,” he said.

In contrast to the Arctic, the Antarctic is currently showing an alternative trend, with the winter maximum extent growing to record levels.

How useful the Reading technique would be in predicting the region’s summer minimums is uncertain.

The factors that control the floes in the south are different to those in the north, and already they diminish to very low extents by autumn as a matter of course anyway.

A New Zealand-led team recently demonstrated that the choppiness of Southern Ocean water could have a moderating impact on the growth of sea ice around Antarctica.

The Reading number has been submitted to Arctic Research Consortium of the United States (ARCUS) Sea Ice Prediction Network. This has become a kind of annual academic “competition” run between scientists who study the Arctic to see whose forecast most closely matches the eventual outcome.