With the holiday season upon the United States, food donations are garnering more attention. But for the 49 million Americans who lived without enough food in 2012, hunger is not just a seasonal struggle. It is also compounded by economic downturns, natural disasters and complex climates.

According to the United Nations World Food Programme (WFP), there is enough food in the world today to feed the planet’s population. Yet across the globe, 842 million people do not have enough to eat, which results in the deaths of 3.1 million children under the age of five each year.

“It’s a very complex problem,” Richard Choularton, Chief of Program Innovations Service for the WFP, said. “A lot has to do with the distribution of food. At the moment, we have enough food in the world to feed everybody, but not everybody has access to it. Either they’re too poor to afford it or the markets aren’t developed well enough to get it to them.”

Most food-insecure people live in rural areas and depend on rain-fed agriculture in fragile and hazard-prone areas, Choularton said. This includes the 650 million people living in arid regions of Africa, where their food supply depends on rain and is vulnerable to floods and droughts.

Droughts and floods account for as much as 80 percent of economic losses across the African continent.

To compensate for what cannot be grown or what is lost in adverse weather, food must be brought in. For some, the added cost of this transportation makes it too expensive to buy. 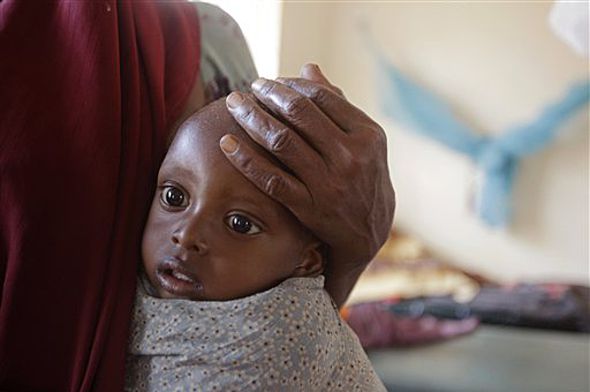 A woman holds her child at a local hospital where children receive treatment for malnutrition at the border town of Dadaab, Kenya. People who can barely stay on their feet due to hunger walk for days or even weeks through parched wasteland to find a meal and water. Many of them also set out to seek help for their ailing children. The drought in the Horn of Africa and the famine in Somalia has left more than two million children at risk of starvation. (AP Photo/Schalk van Zuydam)

Some of the most vulnerable people to food scarcity and poverty actually make their income working on farms to grow and tend to food they cannot afford to eat, Choularton said. As quinoa‘s trendy food status increases its supply across America and Europe, for example, it is becoming too expensive for some of the farmers in Bolivia who grow it to continue eating this grain that has been a staple in local diets for centuries.

“The places with the highest levels of food insecurity and hunger are the places most exposed to climate risk, and that’s really because most food-insecure people don’t have access to good irrigation systems, definitely not greenhouses, and they barely have access to high-yielding seeds and agricultural inputs like fertilizers. So their crop yields are almost entirely determined by the level of labor they put into their soil and how much it rains, when it rains and the distribution of the rains,” Choularton said. 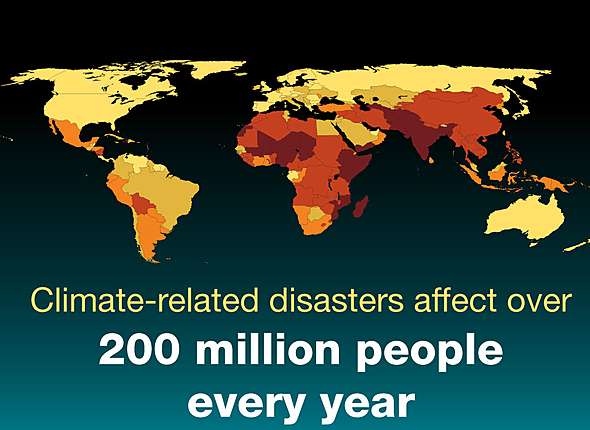 This graphic by Met Office and the WFP shows, from yellow to dark red, which areas face the most risk of climate-related disasters, such as droughts or floods, that can affect food supplies.

Weather and natural disasters impact crops by determining how well they grow or by destroying existing product. Floods, cyclones and other damaging events can also deposit materials, such as sands, onto agricultural fields and into irrigation systems. As a result, the area’s ability to rebound following a major weather event is severely inhibited. 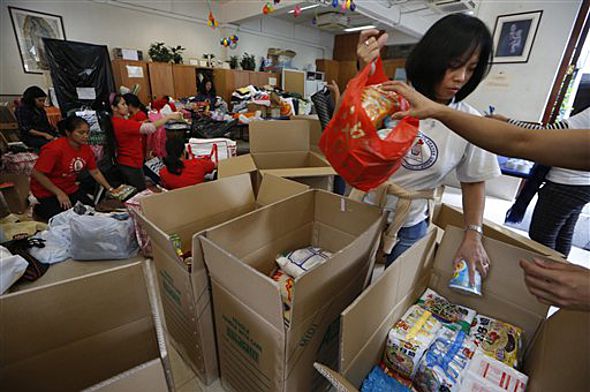 Church volunteers pack boxes of donations for the survivors of Typhoon Haiyan in the Philippines at a church in Hong Kong Sunday, Nov. 17, 2013. (AP Photo/Kin Cheung)

Nationally, Feeding America is the largest networks of food banks and the largest hunger-fighting organization in the U.S.

One of their branches, the Central PA Food Bank, is headquartered in Harrisburg, Pa., and services 27 of the state’s counties, including 121,000 local children under the age of 18 who suffer from hunger and malnutrition. Feeding America food banks work with community networks and food pantries, soup kitchens and low-incoming housing centers to provide for those in need on a local level.

“Our job is to find them the most food, and the most nutritious food, at the lowest cost,” Joe Arthur, executive director of Central PA Food Bank, said. “Primarily that is donated food, and most of that donated food actually comes from food companies, large farms, food producers, USDA commodity foods, really a whole host of sources.”

Arthur said that his food bank serves about 54,000 people per week, which is about 75 percent more than they were serving in 2007 before the economic downtown in the U.S.

Financial hardships that direct people to food banks may only be temporary, such as immediately following the loss of a job. For others, however, even working full time may not be enough to keep adequate food on the table. Poverty, unemployment and hunger are interconnected for many people.

Mississippi, for example, has the lowest median household income of any state at $37,095. It also has the highest percentage of food-insecure residents than any other state, with 20.9 percent of the state’s households struggling to get the food they need.

“Hunger in the United States isn’t really centered around our ability to grow food or produce food,” Arthur said. “So it’s not really our capacity as much as people’s access in their communities.”

In urban areas, as well some rural and even suburban areas, there are areas known as “food deserts,” where low-income families do not have reasonable access to grocery stores or markets with a good selection of food. For many, high-quality and nutritious food is too expensive, or fresh produce is too hard to access, resulting in diets that consist of foods with lower nutritional values or more unhealthy fat content.

When a natural disaster strikes, such as the recent tornado outbreak across the Midwest, the demand grows rapidly. 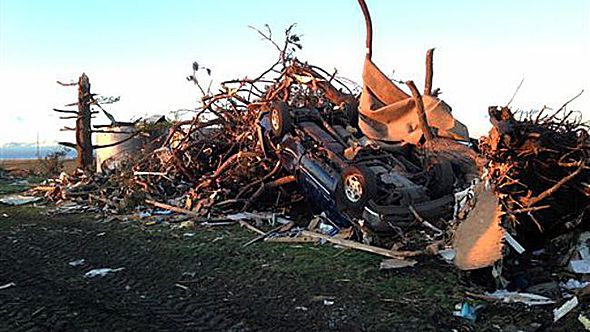 An overturned car rests on top of tree branches and other rubble near the destroyed home of Curt Zehr, about a mile northeast of Washington, Ill. (AP Photo/David Mercer)

“There are layers of need that start to happen as people are displaced from their homes or are not able to afford or get to grocery stores. Our network steps up to serve that need that develops related to the storm, over and above the normal amount of food we provide to people in need. Depending on where you are, there will be a significant increase in demand for communities affected by storms,” Arthur said.

Arthur emphasized that the contributions and volunteer efforts from the general public are a huge part of what the food banks are able to accomplish. He said that without volunteers’ time or food and monetary donations, they would not be able to operate.

While natural disasters and holidays may inspire some of the more publicized food drives, there are people in need in every community year round.

•Visit FeedAmerica.org to find a food bank location near you.
•Find out if you are eligible for assistance.
•Find ways to volunteer to help in your community.
•Organize your own food drive.
•Donate in-demand food staples, such as peanut butter, stews and baby food. For the holidays, frozen turkeys are especially sought out.
•To help abroad, donate to reputable organizations, such as WFP or the Red Cross.
•Buy sustainable, fair-trade imports to help improve livelihood opportunities for people around