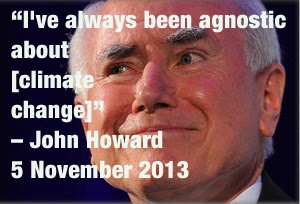 I’ve always been agnostic about [climate change]… I don’t completely dismiss the more dire warnings but I instinctively feel that some of the claims are exaggerated… I don’t accept all of the alarmist conclusions… You can never be absolutely certain that all the science is in.

Agnosticism masking denial has been Howard’s trademark. In February 2007, he told Lateline that 4-to-6 degrees Celsius of climate warming “would be less comfortable for some than it is now”.  Yes, really!

Howard’s art has been well adopted by his protege and now Australian prime minister, Tony Abbott. In both opposition and government, the Abbott-led LNP is prosecuting climate policy as a “culture war”, a broad social polarisation between two conflicting sets of values, principally on the relationship between science and ideology, the role of government, the relationship between humans and nature, and the future of the fossil fuel industry and of society’s technological path. In some aspects it is not dis-similar to the politics brought to Washington by Newt Gingrich and, in a more extreme form, by the Tea Party, exemplified by Abbott’s recent “(carbon) taxation equals socialism” pitch.

The Abbott government’s climate policy exist in the space between denial and delay. It is founded on:

The Abbott government’s strategy is to:

But there are also realities that the Abbott government is desperate to avoid.  These include:

The Abbott government will not be persuaded by reason and is not interested in compromise because this is a battle to be won, and compromise and negotiation are signs of weakness. For this government, fighting enemies is more important than reality-based policy-making. This is about the politics of resentment, fear and revenge, about winning, and about debilitating the enemy. Culture wars are not primarily about policy detail, but about building legitimacy and establishing dominance. These are Abbott’s goals and, in a fashion of being mirror opposites, they must also be ours.

Tony Abbott recently pronounced the former government ”wacko”… Abbott’s message – that the former government is uniquely irrational and inept – is so consistent and vehement, it is difficult to believe that the Prime Minister is not genuinely committed to some version of this idea… He describe(s) the Labor government as ”the most incompetent and untrustworthy … in modern Australian history”… At the very least, Abbott seems to believe his caricature as he draws it. And so confident is Abbott of its veracity or popularity that he will sketch, without pause, his picture for a global audience…
Put simply: Abbott is committed to this caricature of his political rivals, or he at least believes that this portrait will sell as well abroad as it has domestically. Either way, this picture is worrying. It does not suggest practical wisdom: a knack for responding to milieu and ambiguity. It suggests an evangelist or apparatchik, for whom the world is neatly divided into us and them, goodies and baddies, my common sense and their lunacy. Instead, Abbott’s slur suggests that word so often reserved as an insult for the left: ideology.

Talkfests to the tune of $20million in townPrev
Next PostNext