The bulldozers are moving in and so are we 350 0rg

Happy New Year! We hope you’ve all had a great break and are prepared for a momentous 2014.

Here in Brisbane, as in many parts of Australia, we’ve sweltered from yet another scorching heatwave with temperatures soaring to 50 degrees in some parts of the country. The Bureau of Meteorology officially declared 2013 Australia’s hottest year on record and yet the mercury looks set to rise even higher in 2014.

But despite the heat, the fossil fuel industry is going full steam ahead with its plans to build mega coal mines around Australia.

This week, we’ve heard that bulldozers have started felling trees in the Leard State forest, in preparation for construction of the Maules Creek coal mine. That means that the time to step up is now. Join in to stop this mine from going ahead.

Please join the campaign to stop this mine, whether it is heading to the forest now and joining the blockade, or coming to the mass convergence on the January long weekend. 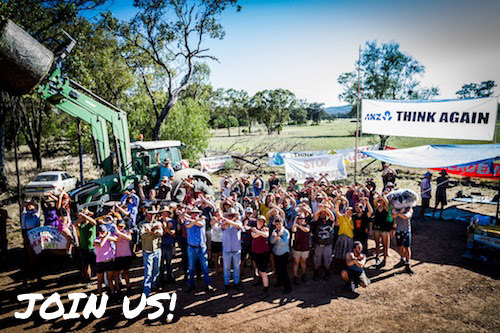 If built, the proposed Maules Creek mine would release carbon emissions almost equivalent to New Zealand’s entire energy sector. It will pump thousands of tonnes of coal dust onto neighbouring communities, drain the water table by several metres and cause the destruction of 1600 hectares of unique bushland and farmland, 544 hectares of which is classified as critically endangered.

For four years now the community have been fighting this mine at every stage. It has been inspiring and deeply moving to watch but now it’s time for us to add our support. Community members have taken their concerns to all Governments, campaigned to stop ANZ from funding the mine, and more recently taken legal action to protect the forest. Yet, unfortunately, at each turn, these concerns have fallen on deaf ears. At each turn the fossil fuel industry has had its way.

The only thing now standing between the forest and the bulldozers is community action.

Today, preparing for the bulldozers to move in, campaigners from all around the country are joining hands with the local community to stop the construction. Protesters have blockaded the entrance to the mine, turning back vehicles seeking to clear the forest for construction of rail infrastructure.

They’re taking a stand but they can’t do it alone. We need you to join them in guarding the forest and stopping the mine.

This fight needs us all. If you are free now, we need your help straight away to help build the initial blockade. If you are new to this type of action, then join the January long weekend convergence – when hundreds will come together to learn about the forest, the campaign and how to stop the destruction. Training and preparation will start from January 25, leading to a large peaceful action on January 28.

This weekend will just be one part of the campaign to stop the mine over the coming months. So if you can’t make it, sign up, and we’ll let you know about how you can be involved in the future.

Governments have failed. The court has ruled against us. Major banks have lent the project money. All that stands between bulldozers and Leard State forest now is us.

It’s time for us to step up our efforts to stop this mine. We look forward to seeing you there.

P.S. If you can’t make it to the forest, don’t worry. The blockade team will need lots of support, whether it is through fundraising or other activities. Sign up now and we’ll let you know how you can help out.

350.org is building a global movement to solve the climate crisis. Connect with us on Facebook and Twitter, and sign up for email alerts. You can help power our work by getting involved locally, sharing your story, and donating here. To change your email