The Tories’ true colours have emerged with their turnaround on green jobs – but why are the Lib Dems following suit? 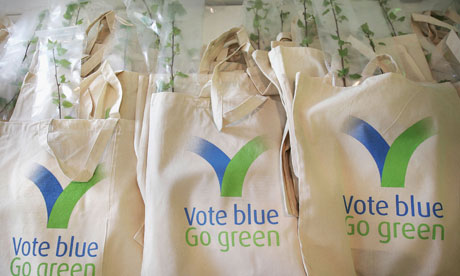 How times change: ‘we should not be surprised that Cameron is allowing George Osborne and his band of regressive ideologues to prevail with their climate sceptic, fossil-fuelled agenda.’ Photograph: Peter Macdiarmid/Getty Images

Whichever way you vote, it’s hard not to cringe at David Cameron’s plight as the leader of a party so publicly eating its young. His traditionalist colleagues’ complicity in the rebranding of the Conservatives was bound to have a hidden price tag, and the last few weeks in politics have shown that this rump of his party is finally calling in the debt.

An important amendment to the energy bill will be voted on in parliament on Tuesday. It is a good example of Cameron’s Janus-face. He promised “the greenest government ever”, yet has whipped his party (£) and pressured his coalition partners to oppose Tim Yeo’s “green jobs” amendment to the bill, which would set a target for clean electricity by 2030.

Yes, the amendment was placed by a Conservative grandee. Yes, it’s a policy officially supported by the Liberal Democrats, by the government’s own climate advisers, by hundreds of businesses, by investors and, in private, by the energy secretary. Yes, it is known to have the individual backing of most MPs and has but two corporate opponents, RWE and Centrica (both energy utilities with large gas investments). Yet in the context of his government’s aggressive “de-rebranding”, we should not be surprised that Cameron is allowing George Osborne and his band of regressive ideologues to hold back this tide of support and prevail with their climate sceptic, fossil-fuelled agenda.

More inexplicable is that the chancellor, already on a yellow card with everyone from the IMF down, is blocking the best opportunity he has to encourage investment in one of the country’s few growth sectors. A third of UK growth last year came from the green business sector.

Taking decarbonisation seriously means the creation of tens of thousands of jobs, with the wind sector alone potentially providing 70,000 by 2030. Even for climate sceptics, a green jumpstart to a flat economy should not be sniffed at. Meanwhile, the Committee on Climate Change (CCC) predicts a proper switch to low carbon power could eventually save households up to £1,600 over the long term.

The risks of not including the target are well aired. Without it, the bill will leave consumers increasingly exposed to gas – the very thing that’s added £150 to household bills over the last three years. Ernst & Young says investors have been left with a sense of uncertainty. PwC says delaying the setting of a target is already affecting investment decisions.

But the real surprise in the energy bill debacle is not that hardline Conservatives are putting ideology before both electoral policy and cold, hard economic fact. The real surprise is that Lib Dems on the government payroll are intent on supporting them in doing so, despite official party policy. Nick Clegg and Ed Davey are adamant to the point of being defensive that they have won the best possible gains in the energy bill by securing funding for clean energy and alleviating fuel poverty. Greenpeace supporters who have written to Lib Dems have been told that to continue pushing the envelope on the 2030 target would risk reopening a “good” deal. To protect that, Lib Dem MPs have been whipped to reject an amendment that encapsulates the very policy they have historically championed.

Davey does deserve some credit for withstanding pressure from Osborne’s Treasury for as long as he did, but the bill in its current form fails to safeguard green investment after 2020.

On Tuesday, backbench Lib Dem MPs will have to make a choice – vote with their conscience and stated party policy, or vote with Osborne and his hardline friends. If they do the latter, they will put at risk thousands of jobs, which will happily sail over to the continent toward Germany. And it would be the first time ministers have rejected CCC advice since its inception in 2008.

Should the Lib Dems concede the 2030 clean electricity target and defy the CCC, they’ll be seen as having sold out on yet another article of faith, leaving the public with little to distinguish one half of the coalition from the other.

Defying Osborne in the face of genuinely high stakes would be to take a clear stance against the advance of the isolationist sceptics, and to reclaim the green jobs agenda on which the Lib Dems where once so at home.