The great election sideshow: Labor v the Coalition on the environment

The great election sideshow: Labor v the Coalition on the environment 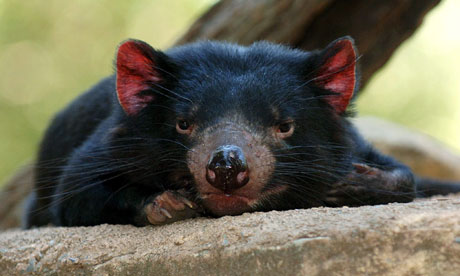 The Tasmanian devil, one of Australia’s most recognisable endangered species. Photograph: Dave Hunt/EPA

Environmental policy in Australia covers vast areas, from saving the Tasmanian devil to the reliability of renewable energy for baseload power. This election has reduced these complex challenges to something of a sideshow, even when referenced during the never-ending debate over the cost of living.

However, the past week has seen a flurry of last-ditch environmental policy announcements by Labor and the Coalition that manage to diverge a little from the narrow prism of energy bills and cutting so-called “green tape”.

Both major parties have made commitments to the health of the Great Barrier Reef, while the Coalition has raised the idea of a threatened species commissioner and a G20-leading role in protecting the world’s rainforests, should it win power.

Here is where the parties stand on the main environmental issues facing Australia.

Kevin Rudd called climate change the “grandaddy” of all policy issues during the second leaders’ debate. He followed that up on Tuesday by claiming that Tony Abbott, who famously once called the science behind climate change “crap”, isn’t “fair dinkum” on the issue.

But Rudd’s critics argue that he has now fudged the issue twice: first when he dropped the emissions trading scheme in his initial term in power and, more recently, by abolishing the fixed price on carbon.

Rudd’s move to “terminate” the carbon tax will see the price of emissions drop to $6 a tonne if, as planned, the system moves to a floating mechanism next year.

The knock-on result will be a reduction in costs for households but has also involved the gutting of important environmental programs such as the Biodiversity Fund and a reprieve for brown coal generators – the most carbon-intensive energy source in Australia.

The Coalition remains implacably opposed to a carbon price – either fixed or floating – and has vowed to dismantle the scheme on pain of a double-dissolution election if necessary. Abbott said on Monday that the costs of an emissions trading scheme, which was once put forward by John Howard, were “almost unimaginable”.

Its alternative Direct Action plan, which combines a “green army” of tree-planters, soil sequestering, and incentives for firms to reduce emissions, will probably fail to reduce Australia’s emissions by the bipartisan target of 5% by 2020 without billions of extra dollars, according to two separate recent studies.

When pressed on this issue, Abbott said he wouldn’t provide the extra funds to reach the 5% emissions reduction. But he insists Direct Action will enable the agreed cut.

Delegation of power to the states 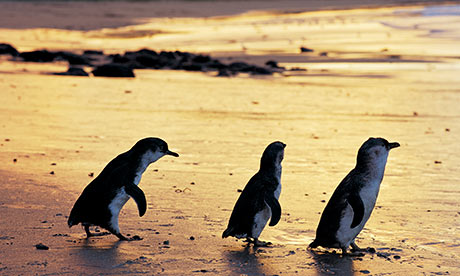 Phillip Island penguins could be under threat if the Victorian government presses ahead with plans to develop the port of Hastings. Photograph: AAP/Phillip Island Nature ParksThe shadow environment minister, Greg Hunt’s electorate of Flinders encompasses Philip Island, where tourists regularly huddle in a stiff breeze to watch the world’s smallest penguins waddle to shore.

These penguins could be in line for a soaking of oil from shipping accidents, according to research conducted for the Victorian National Parks Association, if the Victorian government presses ahead with plans to develop the port of Hastings.

The plans are the latest in a string of state government decisions seen as environmentally reckless by furious conservation groups. For example, last month a court ruled that the Western Australian government had relied on flawed advice to permit the controversial James Price Point gas hub on the Kimberley coast.

The Coalition wants to pare back federal environmental assessments of developments by creating a “one-stop shop”, overseen by the states.

Hunt has said that the plan would speed up a sluggish assessments process, give businesses greater certainty and reduce unnecessary bureaucracy.

Critics claim it will give the under-resourced states licence to trash the environment for short-term gain, with the federal government unable to wield its Environmental Protection and Biodiversity Conservation Act powers to stop mines, ports and agriculture deemed harmful to ecosystems.

Labor has pledged to retain federal oversight of major developments, with Mark Butler, the environment minister, on Tuesday criticising the Coalition-run states’ handling of their natural assets. 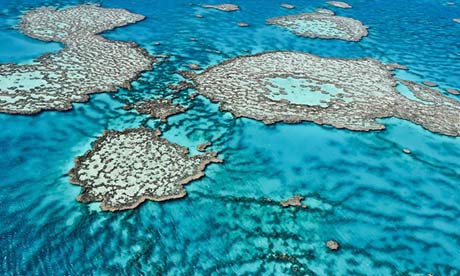 Both parties have committed funds for the rescue of the Great Barrier Reef. Photograph: AFP/Getty ImagesWhichever party wins power on Saturday will be on notice over the prized Great Barrier Reef. In June, Unesco’s world heritage committee said that the reef would be listed as being “in danger” next year unless substantial safeguards were put in place to ensure its wellbeing.

The vast ecosystem, which is home to more than 1,500 species of fish, has lost half of its coral cover over the past 30 years, with chemical run-off from agriculture, a plague of crown-of-thorns starfish, cyclones and bleaching from the warming oceans blamed for the decline.

This week, Labor announced a further $12.6m for its $200m Reef Rescue program, which works with farmers to reduce run-off and funds ways to kill off the coral-eating starfish.

The Coalition, meanwhile, has unveiled its Reef 2050 plan, which involves a $40m reef “trust fund” and $2m for the Australian Crime Commission to investigate the illegal capture of and sale of dugongs.

Conservationists have welcomed the competing plans, although both have glaring omissions – primarily in terms of a response to the world heritage committee’s main stipulation that no new ports be built along the reef and that existing ports are not radically expanded.

The Coalition has told Guardian Australia that it would “prefer” consolidation within existing ports, although much of the responsibility would fall to the Queensland government, which has been described as being “in the coal business” by the premier, Campbell Newman.

Both parties have also been largely silent on the vexed issue of dredging and dumping within the Great Barrier Reef marine park. Butler has deferred a decision over whether to allow dredging at the Abbot Point port until after the election. Environmentalists claim dredging is deadly for dugongs, dolphins, sea turtles and other sea creatures, although the shipping industry has said the impact is minimal.

On the broader issue of marine conservation, the Coalition has vowed to reassess the government’s decision to create the world’s largest string of marine reserves, arguing that the process shuts out the fishing industry.

Labor voted down a proposal to include national parks in federal environmental law in June but now appears to have done a minor U-turn on the issue, promising to consider the matter if re-elected.

The government senses there are voters who are dismayed with the way Coalition-run state governments have handled national parks, citing the prospect of shooting ranges in New South Wales, hotels in Victoria, and logging in Queensland.

The Coalition plans to leave national parks, like most environmental matters, to the states. It has pledged to wind back a world heritage listing for part of Tasmania’s rainforests, while simultaneously advocating a global deal on rainforest protection.

The Murray-Darling basin plan, which finally came to fruition under Labor, has its critics among farmers and environmentalists but is unlikely to be revisited by either party.

The Coalition has also pushed for Wild Rivers designation, which protects waterways from development, to only apply if there is support from traditional owners for a listing. Both Labor and the Coalition have touched upon sweeping proposals to develop northern Australia, which conservationists fret may involve harmful damming of the region’s rivers.

Ian Macfarlane, the shadow resources minister, this week underlined the main energy priorities of the Coalition: scrap the carbon tax, kill off the mining tax and introduce an exploration development incentive to bolster the resources industry.

Labor has also striven to be seen as pro-mining, even approving a mine in the Tarkine region in Tasmania without properly considering its impact on the endangered Tasmanian devil.

Renewable energy continues to make progress in Australia, mainly driven by the strong take-up of rooftop solar and also wind – the Clean Energy Council has reported that records were set in South Australia, Victoria, Tasmania and NSW in August for wind power generation.

The Coalition has promised to abolish everything associated with the carbon price, including the Clean Energy Finance Corporation, which funds renewable projects. It has, however, affirmed its support for the 20% renewable energy target.

Rudd has promoted the benefits of diversifying the economy in the wake of the mining boom, although critics claim that neither Labor nor the Coalition has effectively confronted the Climate Commission’s point that most of Australia’s coal needs to remain in the ground if dangerous levels of global warming are to be avoided.

On the controversial topic of coal seam gas, Labor would retain its ability to assess “fracking” projects that could impact water tables. The Coalition has vowed to bypass the federal consideration of water when assessing coal and gas extraction.

Hunt has been vocal on the topic of threatened species, calling for a more business-like approach to Australia’s poor record of species extinction.

The Coalition wants to introduce a threatened species commissioner to plan and implement strategies to halt the decline of animals such as the Tasmanian devil, Leadbeater’s possum and spotted quoll.

Labor promises to expand the use of strategic assessment powers if re-elected, but has come under fire for cutting $257m from the Biodiversity Fund, which combats threats faced by native animals, such as pests and weeds.

A recent Senate committee report handed down more than 40 recommendations to improve the co-ordination of threatened species work. Conservation groups contend that neither Labor nor the Coalition has a comprehensive, joined-up strategy to help the 1,500 threatened or vulnerable plants and animals in Australia.