Global temperatures are already at the level of the Eemian period, when sea level was some 8 meters higher than today.  With the warming held in the oceans, additional temperature and sea level rise is inevitable.

The release of up to 50 Gt of stored hydrate is highly possible for abrupt release at any time, and could multiply methane levels 11 times. It might happen today.

Eight years after the eruption of the global financial crisis, the conditions are being created for another meltdown of even bigger proportions, amid rising geo-political and economic tensions. The underlying economic contradictions that are fuelling a series of crises that include slowing world trade and rising protectionist measures, the row between the US and the EU over tax payments by Apple, the move by the US Justice Department to impose a $14 billion penalty on Deutsche Bank, the breakdown in talks on the US-sponsored TTIP, and accusations from politicians in Berlin that the US is waging economic warfare.

The Resilience Of An Indigenous Ethiopian Commons

Ethiopia is home to one of the oldest, most effective conservation management systems in sub-Saharan Africa, the Menz-Guassa Community Conservation Area, an 11,100-hectare region. The history of the indigenous land tenure system reveals a great deal about how people in Menz have been able to regularly use, but also preserve, valuable grazing lands and ecosystem services for more than 400 years.

Emissions of the powerful greenhouse gas from coal, oil and gas are up to 60% greater than previously estimated, meaning current climate prediction models should be revised, upwards. 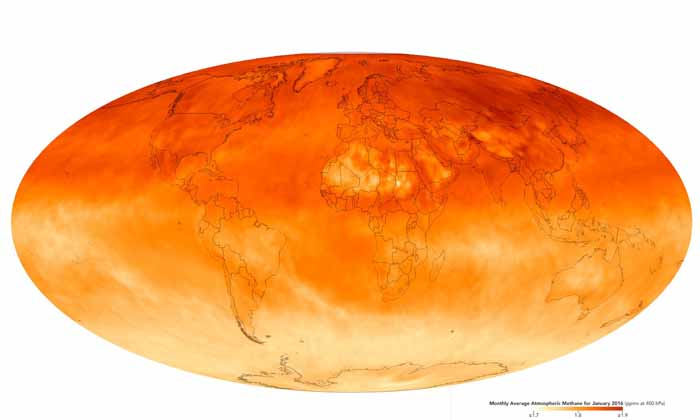 The heart of the garbage patch is thought to be around 1m sq km, with the periphery spanning a further 3.5m sq km. The dimensions of this morass of waste are continually morphing, caught in one of the ocean’s huge rotating currents. The north Pacific gyre has accumulated a soup of plastic waste, including large items and smaller broken-down micro plastics that can be eaten by fish and enter the food chain. The great Pacific garbage patch is growing so fast that it is visible from space.

Solar had already eclipsed coal for a day in April and then for the whole month of May, with coal providing zero power for the first time in more than 100 years for several days in May.

Congress’s Take On The Heroin Epidemic

A heroin epidemic is on fire all across America. Heroin deaths shot up from 1,779 in 2001 to 10,574 in 2014 as Afghan opium poppy fields metastasized from 7,600 hectares in 2001 (when the War in Afghanistan began) to 224,000 hectares currently. The Taliban outlawed opium in Afghanistan in 2000 and within a year it was all but gone, demonstrating that Afghan opium can be eradicated quickly for any administration that chooses to do so. Afghanistan is, by far, the number one source globally of both opium and heroin. In 2014, 7,554 tons of raw opium were produced worldwide, including 6,400 tons in US-occupied Afghanistan and 173 tons from Mexico and Colombia. US-occupied Afghanistan produces 85% of the world’s heroin. Mexico and Colombia produce only 2%.

A region already marred by pipeline geopolitics gets another one! The West is not going to be amused by this new bonhomie between Russia and Turkey. Their animosity will be played out in the battle fields of Syria, while the people of Syria suffer. We don’t know what’s in the offing there after.

Mass incarceration in the US is the new form of slavery targeting Black people.

The numbers are staggering, and governments are doing little to protect people from warring gangs and corrupt security forces. Yet entire families who are now seeking asylum are being sent back and told to simply live elsewhere. An estimated 80,000 people from El Salvador, Guatemala and Honduras, mostly families and unaccompanied children, are expected to apply for asylum overseas this year – a 658% increase since 2011

Imagine that Donald Trump wins the presidency. Then, as he has done throughout his career, he goes after his enemies. He purges the Republican Party of everyone who refused to support him. He initiates criminal proceedings against Hillary Clinton. And he shuts down The New York Times and The Washington Post. That’s exactly what’s happening elsewhere in the world. Welcome to the brave new world of censorship.

A group of lawyers are arguing that the June 23 decision to leave the bloc was not legally binding and Prime Minister Theresa May cannot use a “royal prerogative” to trigger Article 50, the mechanism to formally leave the EU. The hearing is considered an important constitutional question over how the U.K. negotiates the long and tricky split. http://www.telesurtv.net/english/news/Brexit-Vote-Not-Legally-Binding-UK-Court-Told–20161013-0004.html

Was this “arranged” to force the oil price down and discomfort the other players?

The Billion Barrel Oil Swindle: 80% of US Oil Reserves Are Unaccounted-For

US crude oil storage is filling up with unaccounted-for oil. There is a lot more oil in storage than the amount that can be accounted for by domestic production and imports. That’s a big problem since oil prices move up or down based on the US crude oil storage report. Oil stocks in inventory represent surplus supply. Increasing or decreasing inventory levels generally push prices lower or higher because they indicate trends toward longer term over-supply or under-supply.

Big solar to go ahead as developers pay bonds to ARENA

At least 480MW of large-scale solar projects are certain to go ahead in the new year after all 12 winners from the big solar tender held by the Australian Renewable Energy Agency deposited bonds with the federal agency.

Data surveillance is all around us, and it’s going to change our behaviour

Data surveillance started out with online behaviour tracking designed to help marketers customise their messages and offerings. Driven by companies aiming to provide personalised product, service and content recommendations, data were utilised to generate value for customers. But data surveillance has become increasingly invasive and its scope has broadened with the proliferation of the internet-of-things and embedded computing. The former expands surveillance to our homes, cars, and daily activities by harvesting data from smart and mobile devices. The latter extends surveillance and places it inside our bodies where biometric data can be collected.

How we get sucked in by junk food specials in supermarkets

But three in five respondents said they were likely to purchase junk foods – lollies, chocolate, chips, biscuits, ice-cream and soft drinks – when they were on sale or promotion. It’s hardly surprising, given how cheap and conveniently junk foods are located; not just in our shops, but also at transport hubs, workplaces and local neighbourhoods. In an attempt to trigger impulse purchases in supermarkets, processed snack foods are available at the end-of-aisle and in-island bin displays, as well as at the checkout. Sometimes they are on special, or feature large promotional packages, multipacks or two-for-one offers, appealing to price-sensitive shoppers.