Silence in the face of injustice is complicity

I am poor. Hell yes, I am voting for Trump. Tired of politicians. He is putting on a great show, pissing them other bastards off. They deserve it!

Despite Paris Climate Pledge, Planet on Track to Surpass 3.4°C

After 24 years of negotiations we are hurtling towards a catastrophic world. UN Environmental Program has concluded that the Paris pledges to cut emissions will still result in a global temperature rise of 3.4ºC above pre-industrial levels, far above the 2º and 1.5º goals. As heads of state from around the world descend on Marrekech for the COP22 climate conference set to begin on November 7, the UN hopes the report will be “a wakeup call to the world.”

For the full report

Melbourne’s transport uses 311 billion litres of water each year – equivalent to flooding the city’s centre 8 metres deep. Cars are the most water-intensive, using on average 6.4 litres of water per passenger, per kilometre. Diesel trains use 5.2L per pkm and electric trains use the least, at 3.4L per pkm. This means that a typical commuter can use between 140L and 350L of water per day to travel to work and back. This is at least as much as a resident’s daily household water use of 160L.

Imagine a world without animals. You’ll soon see how much we need them

A couple of years ago we heard news that 50% of all vertebrate species had disappeared in 40 years. On Thursday, we were greeted with news that by 2020 the figure is likely to rise to 66% of all vertebrates. It is no wonder that the conservationists are shouting. It is no wonder that they are so desperate to get their message heard. Animals, it seems, are on the way out. And no one appears to much care.Are animals, perhaps, all a bit overrated? Maybe it wouldn’t be so bad?

That the FBI has reopened the Hillary case of her violation of US National Security protocols, not because of the content of the new email releases, but because voter support for Trump seems to be overwhelming, while Hillary has cancelled appearances due to inability to muster a crowd. The popular vote leaves the FBI far out on the limb for its corrupt clearance of Hillary. The agency now has to redeem itself.

Because it’s so blatantly obvious to the entire world that Hillary is guilty as sin, Comey’s whitewash didn’t go over well with either Americans or longtime FBI agents who reacted angrily to Comey’s over-the-top corruption. In recent months Comey has had a virtual mutiny on his hands in the FBI.

‘The FBI is Trumpland’

Deep antipathy to Hillary Clinton exists within the FBI spurring a rapid series of leaks damaging to her campaign just days before the election. Current and former FBI officials have described a chaotic internal climate that resulted from outrage over director James Comey’s July decision not to recommend an indictment over Clinton’s maintenance of a private email server on which classified information transited.

Mainstream Media Support Of Hillary Clinton Will Cost Her The Election

Research done by the American Press Institute found that in a group of 2,000, only 6% trust the media. Over the last two decades, research shows the public has grown increasingly skeptical of the news industry.

What convinces me that the Oligarchy intends to steal the election

The vast difference between reporting and the facts on the ground. According to the press, Hillary is so far ahead that there is no point in Trump supporters bothering to vote. Hillary has won the election before the vote. Hillary has been declared a 93% sure winner. Yet I am yet to see one Hillary yard sign, while Trump signs are everywhere. Reports I receive are that Hillary’s public appearances are unattended but Trumps are so heavily attended that people have to be turned away.

The price per kWh stored and re-used has halved in less than a year. Indicative installed prices in Australia are a little over $10,000. The commonly accepted wisdom was that battery costs would decline more gradually than the precipitate decline seen in solar PV costs. This has been proved wrong.

Since the Suharto dictatorship annexed the region in a 1969 UN referendum now seen as a land grab. 500,000 West Papuans have been killed in their fight for self-rule. Decades of military and police oppression, kidnapping and torture have created a long-standing culture of fear. Local and foreign journalists are routinely banned, detained, beaten and forced to face trial on trumped-up charges. Undercover police regularly trail indigenous religious, social and political leaders. And children still in primary school have been jailed for taking part in demonstrations calling for independence.

A quagmire of incompetence: the true story of the really not very good at all Turnbull government

How many things can go wrong for the Malcolm government?

EU and US Interests in Hungary in Jeopardy

Hungary’s illiberal shift sends a dismal signal. During a retreat with ethnic Hungarian leaders, Orban explicitly outlined his desire to build an “illiberal new state based on national foundations,” citing Russia as a “successful” example.

Climate Change: A Simple Punter’s Guide To The Winners And Losers

Way back in 2003, a US study described the following as plausible: “Nations with the resources to do so may build virtual fortresses around their countries, preserving resources for themselves.” From this ‘fortress’ point of view, Australia’s ‘turning back the boats’, the UK’s withdrawal from the European Union and Donald Trump’s plans to build a wall across the Mexican border are just trial runs for ‘dealing with’ the impending hordes of climate refugees in the future.

Ancient fishes kept their young in a nursery

This is the first time we have a placoderm nursery with more than one species. The nursery in Strud recalls life histories of other groups with adults laying eggs or giving birth in shallow continental environments or near shore.

Tension between the two countries is growing as parties inside Iraq and neighbouring countries become convinced that they are seeing the last days of Isis rule. Turkey sees itself as the protector of the Sunni Arabs of Mosul and northern Iraq. 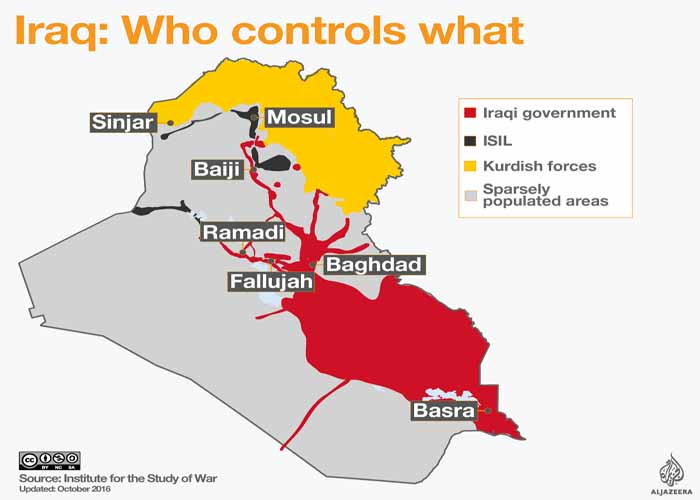