Men occasionally stumble over the truth, but most of them pick themselves up and hurry off as if nothing had ever happened

It is in the region of ignorance that tyranny begins

There is almost no discussion of Israel’s nuclear cruise missiles on three submarines stationed off the coast of Iran. They patrol 24-7, and they can reach any target in Iran in a matter of minutes.

Consider the consequences of the following three reports, three among many. A three-fold improvement in nuclear missile accuracy combined with newly-installed and effective US anti-missile batteries on the Russian and Chinese borders. With early warning satellites the US would have a 30 minute warning of a launch whereas  the others cannot do better than 15 minutes.

This poses an unparalleled threat to the integrity of Russia and China. It has given the US the capacity to annihilate them both with some expectation (as yet unproven) of minimal retaliation.

Will the US make a first strike, or manage to keep the possibility just as a threat? If a threat, the most obvious demand backed by that threat would be “Get rid of your non-dollar currency or we will ….”. This is the one development in these countries that is most capable of undermining US hegemony.

For the threat to work there would need to be a demonstration to prove that the threat was credible. I would expect the US to find a way to provoke the Russians or Chinese to fire a few missiles and then show they can knock them down. Once demonstrated beyond dispute, the US could then demand the submission of both countries from an unassailable position.

The problem with this scenario is that the demonstration could easily escalate into war as both or either of the ‘enemy’ countries find they could not submit and still survive.

A new “super-fuze” device incorporated into submarine-launched ballistic missile warheads are so deadly and accurate that they could possibly wipe out an entire fleet of Russian ICBMs in their silos, creating a preemptive strike-first capability that would give Russia little time to respond.

“Disarming Enemies with a Surprise Nuclear First Strike”. The key turning-point that led to the present crisis was the gradual and increasing acceptance, on the American side, of the concept of using nuclear weapons for conquest instead of only for deterrence. The US nuclear forces modernization program has been portrayed to the public as an effort to ensure the reliability and safety of warheads, rather than to enhance their military capabilities. In reality, however, that program has implemented revolutionary technologies that will vastly increase the targeting capability of the ballistic missile. This increase is astonishing — boosting the overall killing power of existing US ballistic missile forces by a factor of roughly three — and it creates exactly what one would expect to see, if a nuclear-armed state were planning the capacity to fight and win a nuclear war by disarming enemies with a surprise first strike.

According to data from the US Missile Defense Agency, which conducts regular tests of US ballistic missile defense systems, the THAAD system has had 13 successful intercepts out of 13 attempts stretching back to 2006.

And if that threat is not enough, what of methane?

Methane rising, and its not yet summer in the northern Hemisphere

The lower chart shows the inexorable increase in global atmospheric methane levels. The two diagrams in the upper chart show the consequences in which the increased RATE of methane discharge is obvious in the red line. On the left a normal linear scale has been applied that shows that now that the rate has accelerated a linear view of future growth cannot be maintained. On the right Sam Carara has connected the points with a polynomial curve that suggests that we are in for an acceleration of the rate of acceleration itself. The doomsday scenarios issued by scientific bodies that foretell 4C within the next 15 years to some extent reflect this interpretation.

We will include ideas that you can do

to reduce pollution and make yourself more comfortable

TO MITIGATE THE RISING HEAT

As temperatures rise it will be dangerous to be outside on many days and air conditioning will be essential to avoid heatstroke. Since everyone will be in the same situation power stations may not cope. Yet these exactly when the sun is out most of the time. ANSWER: Install solar air-conditioning with an economic heat exchange pump with panels on the roof. It’s a simple solution. Google “Solar aircon” to start looking.

The great British Brexit robbery: how our democracy was hijacked

A shadowy global operation involving big data and billionaire friends of Trump and May. There are three strands to this story. How the foundations of an authoritarian surveillance state are being laid in the US. How British democracy was subverted through a covert, far-reaching plan of coordination enabled by a US billionaire. And how we are in the midst of a massive land grab for power by billionaires via our data. Data which is being silently amassed, harvested and stored. Whoever owns this data owns the future. The Brexit campaign was a military contractor using military strategies on a civilian population. Us.  The documents throw light on a significant and under-reported aspect of the Trump administration. The company that helped Trump achieve power has now been awarded contracts in the Pentagon and the US state department. Its former vice-president Steve Bannon now sits in the White House.

And yet another highjacking, where are you John Perkins?

China’s plans to lead in science and innovation and to take over global technology leadership is relentless. It wants to lead in computing, semiconductors, research and development, and clean energy. It is accelerating science investment as the U.S. retreats. Even in quantum technologies and it wants to be first to build an exascale supercomputer.

After photographing tigers and tapirs in one of Sumatra’s least known wildernesses, conservationists are hoping to discover a hidden population of orangutans in high altitude forests. Sumatra has changed remarkably in the last few decades, from an island of villages and wilderness to one of vast monoculture plantations of pulp and paper and palm oil. Since 1985 the island has lost more than half its lowland forest, and it continues to have one of the highest deforestation rates on the planet. Its large mammals – many of which are found nowhere else in the world – have undergone a severe contraction, leaving them at risk of total extinction.

Many medical studies are junk. It’s an open secret in the research community, and it even has a name: “the reproducibility crisis.” For any study to have legitimacy, it must be replicated, yet only half of medical studies celebrated in newspapers hold water under serious follow-up scrutiny — and about two-thirds of the “sexiest” cutting-edge reports, including the discovery of new genes linked to obesity or mental illness, are later “disconfirmed.”

A deal signed by Russia, Turkey and Iran to create ‘de-escalation zones’ went into effect on Saturday. 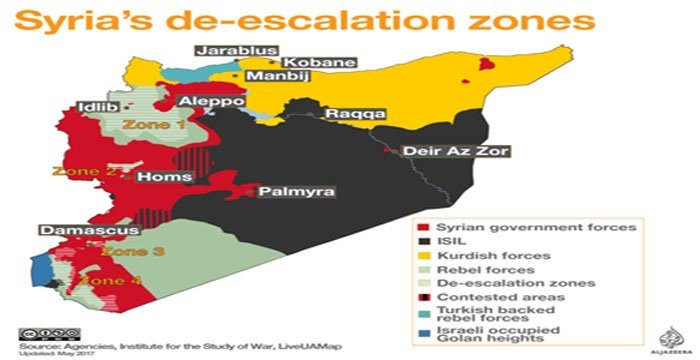 Plan to Hack the Human Brain to Let Us “Upload” Skills

The ideal end benefit for this kind of breakthrough would be downloadable learning. Rather than needing to learn, for example, a new language through rigorous study and practice over a long period of time, we could basically “download” the knowledge after putting our minds into a highly receptive, neuroplastic state.

A major study published Saturday in the prestigious scientific journal Infection found “excessively high” levels of antibiotic and antifungal drug residue in water sources in and around a major drug production hub in Hyderabad, as well as high levels of bacteria and fungi resistant to those drugs. The presence of drug residues in the natural environment allows the microbes living there to build up resistance to the ingredients in the medicines that are supposed to kill them, turning them into superbugs. The resistant microbes travel easily and have multiplied in huge numbers all over the world, creating a grave public health emergency

Government spending explained in 10 charts; from Howard to Turnbull

Fascinating, When you look at the mix of government spending over the the past fifteen years, you start to see some of the drivers of the growth.

Go Electric, Young Man! The Story of the Electric Fiat “500”

Some ten years ago, myself and my friend Pietro Cambi had the weird idea of “retrofitting” Pietro’s old Fiat 500, turning it into an electric car. So, we put this idea into practice in 2007 and it worked. It was, actually, rather easy. An electric car is so much simpler than a car powered by a combustion engine.

Death spiral for cars. By 2030, you probably won’t own one

But you may get a free trip with your morning coffee. Transport-As-A-Service will use only electric vehicles and will upend two trillion-dollar industries. It’s the death spiral for cars. A major new report predicts that by 2030, the overwhelming majority of consumers will no longer own a car – instead they will use on-demand electric autonomous vehicles. And 95% of all passenger miles traveled will be served by on-demand, autonomous, electric vehicles that will be owned by fleets rather than individuals.

Israel Resorts To “Psychological Warfare” To Try To Break Strike

More than 1,500 Palestinian prisoners entered their fourth week without food on Monday as Israel intensifies its efforts to break the hunger strike.

The great British Brexit robbery: how our democracy was hijacked

It also reveals a critical and gaping hole in the political debate in Britain. Because what is happening in America and what is happening in Britain are entwined. Brexit and Trump are entwined. The Trump administration’s links to Russia and Britain are entwined. And Cambridge Analytica is one point of focus through which we can see all these relationships in play; it also reveals the elephant in the room as we hurtle into a general election: Britain tying its future to an America that is being remade – in a radical and alarming way – by Trump.  There are three strands to this story. How the foundations of an authoritarian surveillance state are being laid in the US. How British democracy was subverted through a covert, far-reaching plan of coordination enabled by a US billionaire. And how we are in the midst of a massive land grab for power by billionaires via our data. Data which is being silently amassed, harvested and stored. Whoever owns this data owns the future.

global oil discoveries have been much lower than production for quite some time.  The IEA also stated that the amount of world conventional oil discoveries averaged about 9 billion barrels for the past 15 years.  If we assume that the world was producing 65 mbd of “conventional oil” for the past 15 years (it was likely higher), the world was only replacing about 38% of its annual oil consumption.