I fear the train has already left the station

Signs that the North Atlantic Thermohaline Circulation is weakening

For nearly three decades prominent climate scientists have been warning policymakers that salt and heat driven circulation of the world ocean system (called thermohaline — thermo for heat and haline for salt) could be disrupted by cold water outflows from Greenland. The North Atlantic between Newfoundland and Ireland is the only region of the world that has defied global warming and cooled. Last winter [this region] was the coldest on record, while globally it was the hottest on record. The evidence is mounting that the long-feared circulation decline is already well underway.

Without the large-scale sinking of salty water in the North Atlantic the influx of warm water from the tropics to replace it would not occur, effectively switching off the thermohaline circulation. Past changes in have occurred during periods of relatively rapid climate change, such as transitions in and out of glaciations. Similarly, the rapid warming we are currently experiencing could trigger an abrupt shutdown and subsequent regional cooling.

The Western pubic doesn’t know it, but Washington and its EU allies are convincing Russia that they are preparing to attack. If you were Russian, wouldn’t you remember the Cuban Missile Crisis?

It’s only by chance that the world has avoided a nuclear war — sometimes by nothing more than dumb luck — and, rather than enhancing our security, nukes “now endanger it.” What’s made today’s world more dangerous, is a series of actions by the last three US administrations.

* The decision by President Clinton to abrogate a 1990 agreement with the Soviet Union not to push NATO further east after the reunification of Germany or to recruit former members of the defunct Warsaw Pact.

* The 1999 US-NATO intervention in the Yugoslav civil war and the forcible dismemberment of Serbia.

* Bush’s unilateral withdrawal from the Anti-Ballistic Missile Treaty and the decision by Obama to deploy anti-missile systems in Romania and Poland, as well as Japan and South Korea.

* The current decision to spend $1 trillion upgrading US nuclear weapons, including building bombs with smaller yields that blurs the line between conventional and nuclear weapons.

The power differential between the US and Russia is so great that the Russians have abandoned their pledge to never be the first to use nuclear weapons.

The trouble with democracy

The pattern of democratic life is to drift into impending disaster and then to stumble out of it. Undemocratic practices creep up on us unawares, until the routine practices of democracy – a free press, a few unbiddable politicians – expose them. When that happens, democracies do not get a grip; they simply make the minimum of necessary adjustments until they drift into the next disaster. What is hard for any democracy is to exert the constant, vigilant pressure needed to rein in the forces that produce the crises. It is so much easier to wait for the crisis to reveal itself before trying to do something about it.

US fears over Donald Trump’s connections with Russia

Respected publications have commented on the convergence between Trump’s statements and geopolitical positions that Russia has long sought, with implications should Trump become president.

This neatly avoids discussion of what Clinton really did

Sanders charged Clinton with “looting funds meant for the state parties to skirt fundraising limits on her presidential campaign, exploiting the rules in ways that let her high-dollar donors skirt legal limits.”

Including schools, charities, unions and medical centres, and extends the time a person can be detained to 30 days. Turkey has suspended 37,500 civil servants and police officers in the wake of the coup, including many from the education ministry, and also revoked the licenses of 21,000 teachers, and closed more than 600 schools.

Why have teachers and academics been targeted?

The aim is to weed out all Gülen schools and those associated with them from all aspects of the state. Such a purge is deeply troubling, especially the sacking of the university deans.

As more evidence surfaces daily it seems the CIA was playing a huge role behind the July 15 coup attempt.

Is this why Russia has just become Turkey’s best friend?

A summary of new batteries and new energy storage systems that have been announced in Australia.

In the Amazon, the Congo, Siberia and Alaska outpouring methane is inflaming the wildfires.

High Temperatures In the Arctic

This year to April the Northern Hemisphere oceans were 0.85°C warmer than the 20th century average, while temperatures as high as 28.9°C were recorded over the Mackenzie River close to the Arctic Ocean on June 13.

Pakistan: A Battle for the Soul of a Nation

They targeted a group of random individuals, prolonged the attack to maximize media exposure, and engaged in an attack that provided little hope of escape. However, these developments are only the latest evolution of a long-existing effort to reverse the secular democratic principles on which Bangladesh was founded.

How to Arm a “Volatile” Planet

The U.S. political system is also a global arms distribution system. During Obama’s first six years in office, Washington entered into agreements to sell more than $190 billion in weaponry worldwide — more than any US administration since World War II.  Obama has loosened restrictions on arms exports, making it possible to send abroad a whole new range of weapons and weapons components with far less scrutiny than was previously required.

Is a Civil War Looming in Israel?

“We are on the verge of an uprising of hatred, racism, darkness and upcoming killings and assassination based on the overwhelming internal hatred here. We hear hatred at every turn, whether it is directed toward women by military rabbis, by Ashkenazi Jews against Sephardi Jews and Mizrahi Jews against Ashkenazis. This way the seeds of the uprising of hatred are planted, which will lead to a civil war. This hatred is being carried out by the full support and cover of those in charge.”

Economic Development and the Concept Of “Resistance Economy”

They are the instruments to buy corrupt government officials with unaccounted loans or credits that increase national debt and increase dependence on the western predatory corporate and finance system. Its neocolonialism at its best – nothing to do with ‘development of poor countries’. To the contrary – its debt-dependence for easy exploitation.

The bank’s latest move confirmed its strategic goal to “end the US dollar’s hegemony” and “forge a new global financial order.” In an article for the financial publication MarketWatch, research analyst David Marsh tried to suggest a wider strategy: “The world’s second-largest economy is embarking, pragmatically but steadily, toward enshrining a multicurrency reserve system at the heart of the world’s financial order.”

With the coal boom on the wane, mining companies want to escape the cost of rehabilitating their sites. The Queensland Resources Council has forecast that in central Queensland there will be 120,000 hectares disturbed from mining by 2020. Yet only about 560 hectares has been certified by the environment department as successful progressive rehabilitation.

As wildfire rages in California, flooding affects millions in India and China, and eggs are fried on sidewalks in Iraq, scientists say global climate catastrophe is surpassing predictions

over Siberia, Africa and the Amazon correlate with wildfires and extreme drought conditions associated with climate change. Add in C02 spikes over the same region and it begins to look like a self-amplifying feedback.

Hillary the Hawk: A History

From Haiti to Syria, Hillary’s long record suggests she’s looking forward to being a war president on day one.

The Liberal Party secured more than double the donations of the Labor Party, with the Coalition receiving around $13 million and Labor recording under $5 million.

China on the Defensive?

The South China Sea dispute has put a damper on China’s Maritime Silk Road. Agreements with Philippines are on hold. Trade with Southeast Asia has declined, and Japan has replaced China as the leading source of infrastructure development funds in the ASEAN countries.

A maze of money

Chart of the connections between money sources and their transfer by the millions into the coffers of the candidates that support the authoritarian policies of the billionaire Koch brothers. 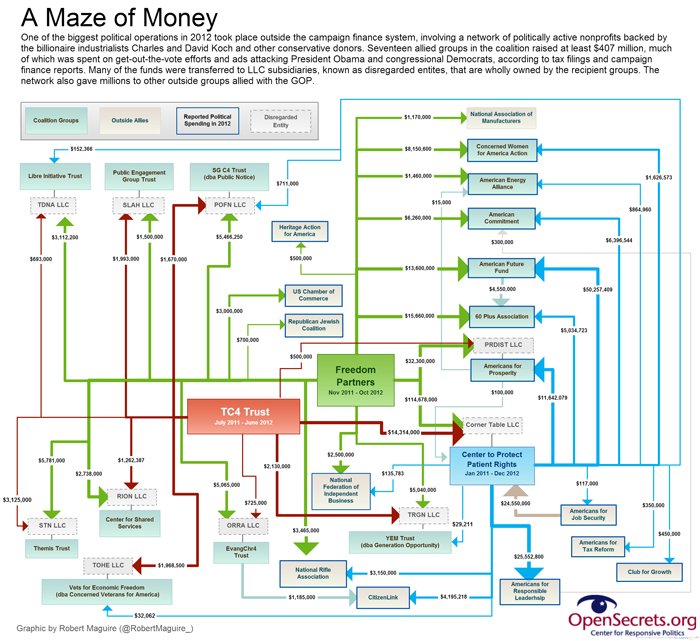