Climate change 10 times faster than any change recorded in past 65 million years. Without intervention, this extreme pace could lead to a 5-6 degree Celsius spike before the end of the century

Those who have the privilege to know, have the duty to act

America is totally misinformed and disinformed by their government. This is tragic and our media is beyond telling us anything that the government doesn’t want us to know

The war planners in Washington know all too well that in the real world of America’s dirty war in Syria there are no  “good” or “bad” rebels. They are all part of a proxy front of armed militants, which the US and its NATO and Arab allies have funded, armed, trained and directed for the past six years to overthrow the Syrian government.

375 of the world’s top scientists, including 30 Nobel Prize winners, published an open letter: the evidence is clear that humans are causing climate change. The seas are rising, the oceans are warming, the lower atmosphere is warming, the land is warming, ice is melting, rainfall patterns are changing and the ocean is becoming more acidic. These facts are incontrovertible. No reputable scientist disputes them. It is the truth. Despite these facts, the letter reports that the US presidential campaign has seen claims that the earth isn’t warming, or it is only a natural warming, or that climate change is a hoax. These claims are false. The claims are made by politicians or real estate developers with no scientific experience. These people who deny the reality of climate change are not scientists.

Is this a symbol for our lives today, tied in knots and never sure where they came from or what they tied?

NASA: Earth is warming at a pace ‘unprecedented in 1,000 years’

Records of temperature that go back far further than 1800s suggest warming of recent decades is out of step with any period over the past millennium. This year has already seen scorching heat around the world, with the average global temperature peaking at 1.38C above levels experienced in the 19th century. Just five more years of C02 emissions at current levels will virtually wipe out any chance of restraining runaway climate change.

Crisis at the Third Pole

At the top of the world a climate disaster is unfolding that will impact the lives of more than 1 billion people. The real worry is the melt will set off a chain of climate disasters like the recent epic floods in Pakistan and China, or unprecedented heatwaves in India, or increasing desertification across the region. And the deeper concern is that while scientists know the changes in the Third Pole will affect global weather patterns such as monsoons and the El Nino, they don’t know by how much. And in a region where tension between countries over shared water resources is becoming increasingly common, the environmental threat is likely to spark a political one.

The US toppled more than 50 sovereign governments since the end of World War 2.

While the presidential candidate talks regularly about her plan for the US to become a “clean energy superpower”, in recent months she has rarely made reference to the planetary crisis that necessitates it. On Monday, when she launched her pitch to millennials online, she could find no room for an issue that will affect that voting cohort more than any other.

“Given the far-reaching implications, it is morally imperative that this hypothesis be the subject of a truly scientific and impartial investigation by responsible authorities,”

The video is worth watching.

Israel has ‘200 nukes all pointed at Iran’

This figure shows the correlation between rising levels of CO2 and the acidity of the oceans has increased by 30% from pre-industrial times. Many creatures in the ocean require a fairly narrow range of temperature and/or pH to survive. A warming ocean causes creatures that can move, like jellyfish, to move northward to cooler waters, while those that can’t move, like coral, die of heat stress. Acidification interferes with the formation of shells made of calcium carbonate, because decreasing pH means decreasing availability of carbonate ions. Some of those shelled creatures are microscopic and are at the base of the food chain, so their demise affects all ocean life as well as we humans who depend on it.

From Permian-Triassic rocks in China, comes unprecedented precision to our understanding of the event. They have dramatically shortened the timeframe for the initial carbon emissions that triggered the mass extinction from roughly 150,000 years to between 2,100 and 18,800 years. This new timeframe is crucial because it brings the timescale of the Permian Extinction event’s carbon emissions into the ballpark of human emission rates for the first time. All the other major extinctions were like today’s climate change – rapid global warming, ocean acidification, and sea level rises, together with oxygen-less ocean dead zones and extinctions – triggered by rare volcanic outpourings that emitted massive volumes of CO2 and methane at rates comparable to today’s emissions.

The end-Permian mass extinction was the most severe loss of marine and terrestrial biota in the last 542 My.

What is driving the continued heating of the Earth, and indeed, driving it harder than ever achieved by C02 alone, is methane. Much of the carbon came from large deposits of methane hydrate, a peculiar, icelike compound that consists of water molecules forming a cage around a single molecule of methane. Hydrates are stable only in a narrow band of cold temperatures and high pressures; large deposits of them are found under the Arctic tundra and on the slopes that link the continental shelves to the deep abyssal plains.

The Paleocene-Eocene Thermal Maximum (PETM) occurred around 56 million years ago. It is the most recent event that is comparable to today’s warming. Global temperatures rose more than 5°C and lasted 200,000 years before the Earth system was able to remove the extra CO2 from the atmosphere.

At the PETM an initial warming might have melted hydrates and allowed methane molecules to slip from their cages and bubble into the atmosphere. The hypothesis is alarming. Methane in the atmosphere warms the Earth over 20 times more per molecule than carbon dioxide does, then after a decade or two, it oxidizes to CO2 and keeps on warming for a long time. Many scientists think just that kind of scenario might occur today: The warming caused by the burning of fossil fuels could trigger a runaway release of methane from the deep sea and the frozen north. 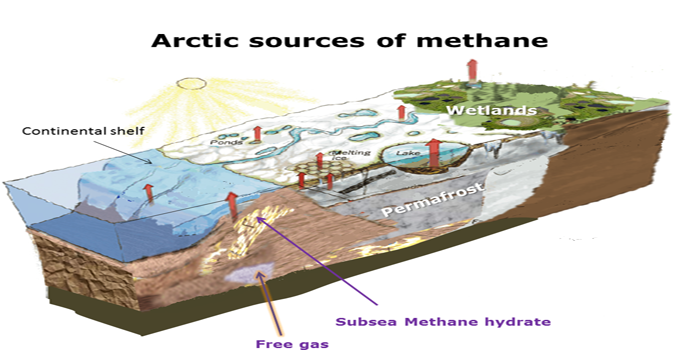 China’s total debt is the equivalent of 255% of GDP – and while this is big, it is comparable to the UK and Europe. The bigger issue is the speed at which China has taken on debt – it was 147% only eight years ago and was not sufficiently productive to grow the economy. Outstanding loans have reached $US28 trillion, as much as the commercial banking systems of the US and Japan combined. The scale is enough to threaten a worldwide shock if China ever loses control.

The silencing of the seas: how our oceans are going quiet

Fires associated with palm oil and timber are mostly to blame. Smoke haze from agricultural fires may have caused more than 100,000 premature deaths across Indonesia, Malaysia, and Singapore last fall

Central Bank Digital Currency would not eliminate physical cash. Only the legislature could do that, and blockchain technology would not be needed to pull it off, since most money is already digital. What is unique and potentially revolutionary about a national blockchain currency is that it would eliminate the need for banks in the payments system. In giving everyone access to the central bank: there could be a massive run on the banks as depositors moved their money out. If so, where would the liquidity come from to back bank loans? He says lending activity could be seriously impaired. It will change every transactional process you know. Simply put, blockchain eliminates the need for clearinghouse entities of any kind. And that means a revolution is coming, a fundamental sea change in the way we do business.

We are losing our ability to treat infections. It threatens our whole ability to handle patients and our ability to grow enough food. “It’s clear that if we don’t begin to reverse it now, it’s going to be much harder in the future”. Antibiotics are overused when they are taken for viral infections like colds and flu, and when they are given as growth promoters in animals and fish.

Much of Greenland is rising far more rapidly than thought

This means 19 cubic kilometres more ice is falling into the sea each year, an increase of about 8% on earlier figures. The faster rebound is thought to be the result of hotter, more elastic mantle rocks under eastern Greenland, a remnant from 40m years ago when the island passed over the hot spot that now powers Iceland’s volcanoes.