How can we understand the miserable failure of contemporary thinking to come to grips with what now confronts us?

Children on the edge! Playing by the garbage dump, Calcutta 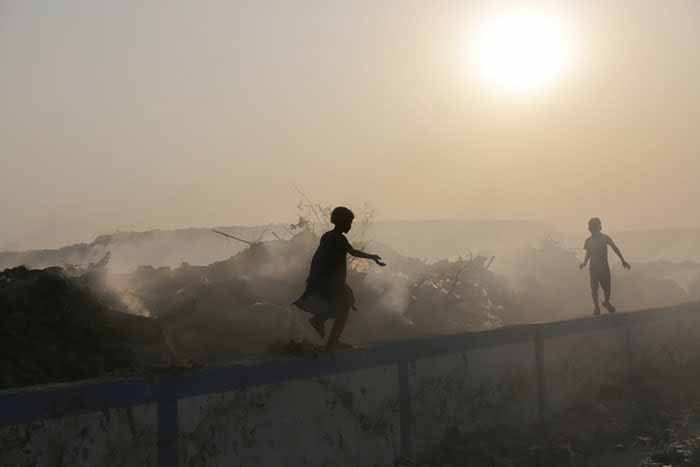 Isn’t this the great question? The reason we shall let ourselves drift to extinction within a lifetime?

An edited extract from Clive Hamilton’s Defiant Earth: The fate of humans in the Anthropocene,

After 200,000 years of modern humans on a 4.5 billion-year-old Earth, we have arrived at new point in history: the Anthropocene. The change has come upon us with disorienting speed. It is the kind of shift that typically takes two or three or four generations to sink in.

Our best scientists tell us insistently that a calamity is unfolding, that the life-support systems of the Earth are being damaged in ways that threaten our survival. Yet in the face of these facts we carry on as usual.

Most citizens ignore or downplay the warnings; many of our intellectuals indulge in wishful thinking; and some influential voices declare that nothing at all is happening, that the scientists are deceiving us. Yet the evidence tells us that so powerful have humans become that we have entered this new and dangerous geological epoch, which is defined by the fact that the human imprint on the global environment has now become so large and active that it rivals some of the great forces of nature in its impact on the functioning of the Earth system.

This bizarre situation, in which we have become potent enough to change the course of the Earth yet seem unable to regulate ourselves, contradicts every modern belief about the kind of creature the human being is. S

For some it is absurd to suggest that humankind could break out of the boundaries of history and inscribe itself as a geological force in deep time. Humans are too puny to change the climate, they insist, so it is outlandish to suggest we could change the geological time scale. Others assign the Earth and its evolution to the divine realm, so that it is not merely impertinence to suggest that humans can overrule the almighty, but blasphemy.

Many intellectuals in the social sciences and humanities do not concede that Earth scientists have anything to say that could impinge on their understanding of the world, because the “world” consists only of humans engaging with humans, with nature no more than a passive backdrop to draw on as we please.

The “humans-only” orientation of the social sciences and humanities is reinforced by our total absorption in representations of reality derived from media, encouraging us to view the ecological crisis as a spectacle that takes place outside the bubble of our existence.

How should we understand the disquieting fact that a mass of scientific evidence about the Anthropocene, an unfolding event of colossal proportions, has been insufficient to induce a reasoned and fitting response?

For many, the accumulation of facts about ecological disruption seems to have a narcotising effect, all too apparent in popular attitudes to the crisis of the Earth system, and especially among opinion-makers and political leaders. A few have opened themselves to the full meaning of the Anthropocene, crossing a threshold by way of a gradual but ever-more disturbing process of evidence assimilation.

Beyond the science, the few alert to the plight of the Earth sense that something unfathomably great is taking place, conscious that we face a struggle between ruin and the possibility of some kind of salvation.

Today the greatest tragedy is the absence of a sense of the tragedy. The indifference of most to the Earth system’s disturbance may be attributed to a failure of reason or psychological weaknesses; but these seem inadequate to explain why we find ourselves on the edge of the abyss.

How can we understand the miserable failure of contemporary thinking to come to grips with what now confronts us? A few years after the second atomic bomb was dropped, Kazuo Ishiguro wrote a novel about the people of Nagasaki, a novel in which the bomb is never mentioned yet whose shadow falls over everyone. The Anthropocene’s shadow too falls over all of us.

Yet the bookshops are regularly replenished with tomes about world futures from our leading intellectuals of left and right in which the ecological crisis is barely mentioned. They write about the rise of China, clashing civilizations and machines that take over the world, composed and put forward as if climate scientists do not exist. They prognosticate about a future from which the dominant facts have been expunged, futurologists trapped in an obsolete past.

It is the great silence. it is as if the projections of Earth scientists are so preposterous they can safely be ignored.

Perhaps the intellectual surrender is so complete because the forces we hoped would make the world a more civilised place – personal freedoms, democracy, material advance, technological power – are in truth paving the way to its destruction. The powers we most trusted have betrayed us; that which we believed would save us now threatens to devour us.

For some, the tension is resolved by rejecting the evidence, which is to say, by discarding the Enlightenment. For others, the response is to denigrate calls to heed the danger as a loss of faith in humanity, as if anguish for the Earth were a romantic illusion or superstitious regression.

Yet the Earth scientists continue to haunt us, following us around like wailing apparitions while we hurry on with our lives, turning around occasionally with irritation to hold up the crucifix of Progress.

A review: There is no-one in the world who has reflected more honestly, courageously or profoundly than Clive Hamilton on the overwhelmingly most consequential question of our era: our species’ willingness to watch on passively and calmly as the once human-friendly Earth is gradually but inexorably destroyed.  Defiant Earth completes the argument of two previous books, Requiem for a Species and Earthmasters. It is a dark, disturbing, provocative and entirely original work, which should be read by everyone genuinely interested in the future of humankind.’