We’re going to have to send China a clear signal that, first, the island-building stops and, second, your access to those islands is not going to be allowed

We’re going to war in the South China Sea in five to 10 years, aren’t we? There’s no doubt about that

The Reef is the largest living thing on Earth. Easily visible from space, the 1,400-mile-long, 133,000-square-mile ecosystem is home to more than 1,500 species of fish and over 600 types of hard and soft corals. Portions of the reef have been dated as old as 20 million years. The world’s most qualified coral reef experts released a report showing that, without dramatic intervention, the Reef would disappear completely by 2030. “We’ve never seen bleaching like this,” 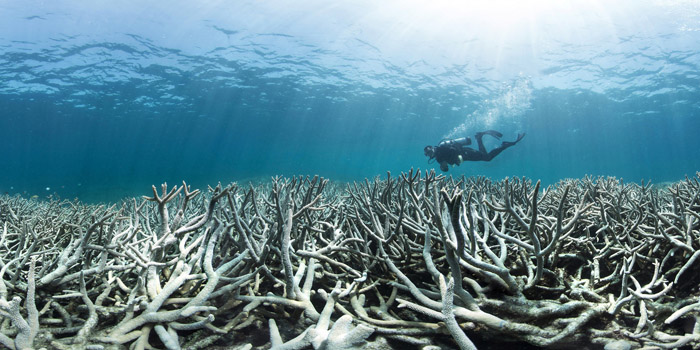 he economics has shifted decisively in favour of renewable energy. Professor Ross Garnaut said, “Nowhere in the developed world are solar and wind resources together so abundant as in the west-facing coasts and peninsulas of southern Australia. Play our cards right, and Australia’s exceptionally rich endowment per person in renewable energy resources makes us a low-cost location for energy supply in a low-carbon world economy. That would make us the economically rational location within the developed world of a high proportion of energy-intensive processing and manufacturing activity. Play our cards right, and Australia could become a superpower of the low-carbon world economy.”

Solar costs have plummeted by 58% in just five years and look set to continue to fall by somewhere between 40 and 70% by 2040. Already solar plants are delivering electricity far cheaper than new coal, gas or nuclear,

The four-decade-long assault on our democratic institutions

Labor unions are a spent force. The press is corporatized and distrusted. Universities have been purged of dissidents and independent scholars who criticise neoliberalism. Public broadcasting and the arts have been defunded. The courts have been stacked with judges whose legal careers were spent serving corporate power. Money has replaced the vote, which is how someone as unqualified as Betsy DeVos can buy herself a Cabinet seat.

This is how Fascism creeps in,

The Arizona Senate voted to expand racketeering laws to allow police to arrest anyone involved in a protest and seize their assets, treating demonstrators like organized criminals. The law expands the definition of a riot to allows police to make arrests when they suspect a protest will turn violent—even before it actually has.

The rise of hate groups in the US

From 2015 to 2016 the number of anti-Muslim hate groups in the US almost trebled.

A aircraft carrier strike group has begun patrols in the South China Sea amid growing tension with China over control of the disputed waterway. China’s Foreign Ministry warned Washington against challenging its sovereignty in the region.

Will we still be able to feed ourselves as the climate get hotter?

The supermarket food gamble may be finished

In the past 40 years, a whole supermarket system has been built on the seductive illusion of Permanent Global Summer Time. A cornucopia of perpetual harvest is one of the key selling points that big stores have over rival retailers. But when you take into account climate change, the shortages in the UK look more like a taste of things to come than just a blip.

The rapid rise of the farmers’ markets, home-delivery vegetable boxes and the resurgence of farm shops.

Scientists Report Escalating Attacks Under Trump, But Vow to Fight On

“If you believe climate change is a hoax perpetrated by the Chinese, as Donald Trump does, you will go after anything that opposes that view. A lot of people will be hung out to dry.”

Amazing battle for dominance is playing out between the elected US government & the intelligence community who consider themselves to be the permanent government.

Per Capita Oil: The key to understanding the end of the Industrial Age

Oil is a finite resource. The world has already used 1.2 trillion barrels from an estimated ultimate recoverable resource of 2.4 trillion barrels, with half of that in the last 25 years. We are at the midpoint of the two-lifetime, oil-fueled Industrial Age.

He got screwed in a business deal in Mexico and has been hostile to the country ever since.

Wave of fear strikes immigrant communities in Houston, across Texas

Teachers in Austin rode home with students to make sure their parents had not been deported during the school day.

Its an interesting exercise to note which countries have NOT invited the US in.

Three consecutive bailout programs have deprived the nation of its fiscal sovereignty, transferred many of its publicly owned assets and resources into private hands (virtually all foreign), produced the collapse of the public health care system, slashed wages, salaries and pensions by as much as 50%, and led to a massive exodus of the skilled and educated. As for democracy, it has been seriously constrained since the moment the first bailout went into effect as all governments pledged allegiance to the European Commission, the European Central Bank and the IMF, and obey their commands, irrespective of the needs and wishes of the Greek people.

Joy And Fear: A Mother’s Lot In Gaza

Whenever I hear a loud sound, I run to my child and hug her. Every night I hear thunder, I bend over and cover her to try and protect her. The havoc the last war wrought on my soul is immense, the sound of the bombing and shelling traumatize me to this day.

The spy in your living room

Samsung has confirmed that its “smart TV” sets are listening to customers’ every word, and the company is warning customers not to speak about personal information while near the sets. The voice activation feature will capture all nearby conversations, and can share the information, including sensitive data, with Samsung and anyone else.

The ZAD: An Autonomous Zone in the Heart of France

It all started decades ago with the local resistance against the construction of a second airport near the city of Nantes in western France. Eight years ago, this resistance culminated in the establishment of a self-organized autonomous zone, commonly known as the ZAD

With governments searching for ways to reduce spending, and 16% of the federal budget being spent on health, tackling physical inactivity of individual patients, as well as ensuring our urban centres are walking- and cycling-friendly would make a major difference.

Norway has joined an international initiative to raise millions of dollars to replace shortfalls left by U.S. President Donald Trump’s ban on US-funded groups worldwide providing information on abortion. In January, the Netherlands started a global fund to help women access abortion services, saying Trump’s “global gag rule” meant a funding gap of $600 million over the next four years, and has pledged $10 million to the initiative to replace that. Sweden, Denmark, Belgium, Luxembourg, Finland, Canada and Cape Verde have all also lent their support.