From Tolpuddle to Extinction – a continuum.

Before 1824 the Combination Acts had outlawed “combining” or organising to gain better working conditions. In 1824/25 these acts were repealed, so trade unions were no longer illegal. In 1833, six men from Tolpuddle in Dorset founded the Friendly Society of Agricultural Labourers to protest against the gradual lowering of agricultural wages.
These Tolpuddle labourers refused to work for less than 10 shillings a week, although by this time wages had been reduced to seven shillings and were due to be further reduced to six. The society, led by George Loveless (or Lovelass), a Methodist local preacher, met in the house of Thomas Standfield.

In 1834, James Frampton, a local landowner and magistrate, wrote to Home Secretary Lord Melbourne to complain about the union. Melbourne recommended invoking the Unlawful Oaths Act 1797, an obscure law promulgated in response to the Spithead and Nore mutinies, which prohibited the swearing of secret oaths. James Brine, James Hammett, George Loveless, George’s brother James Loveless, George’s brother in-law Thomas Standfield, and Thomas’s son John Standfield were arrested and tried before Sir John Williams in R v Lovelass and Others. They were found guilty and transported to Australia. 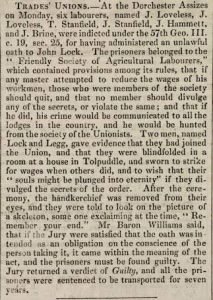 When sentenced to seven years’ penal transportation, George Loveless wrote on a scrap of paper lines from the union hymn “The Gathering of the Unions”:

God is our guide! from field, from wave,
From plough, from anvil, and from loom;
We come, our country’s rights to save,
And speak a tyrant faction’s doom:
We raise the watch-word liberty;
We will, we will, we will be free!

In England they became popular heroes and 800,000 signatures were collected for their release. Their supporters organised a political march, one of the first successful marches in the UK, and all were pardoned, on condition of good conduct, in March 1836, with the support of Lord John Russell, who had recently become home secretary.

People can make change. The actions of the Tolpuddle martyrs led to the ILU conventions of labour that guaranteed the right to strike and many more of the basic moral industrial human rights that we have since taken for granted.

Now we are approaching a time when those standards are threatened once again. History has a tendency to repeat. What came about because of the industrial revolution is echoed in our time by the advancement of technology. The automation of human work has now been accompanied by automation of operational management in the form of administration of work using smart phone apps. What looks like an amazing new technological development is no more amazing than the introduction of the combustion engine that made much of human labour redundant.

How does this apply now? Look at Uber as an example of the new automation, that seeks to replace every human with an automated double. From the support staff to the drivers, there is little need for human endeavour. Uber is an experiment in automating the back end of the taxi business that will eventually extend to the actual provision of transport. Cars will be cheaper to hire without drivers. Maintenance will be cheaper and more efficiently carried out by robots.

It’s the obvious next move. When workers become redundant because they are replaced by machines, we see fewer jobs competed for by more workers, and this employers’ market gives rise to a reduction of wages that is commonly justified by the need for competitive pricing of the final product. A factory full of knitting machines does not pay wages and can therefor produce cheaper goods than a factory of workers with spinning wheels and looms.

This software revolution does not end with reduction. It is the end of human labour. Every occupation is open to replacement by sophisticated machinery. We’ve built the computers, we’re on the verge of nano-technology, and the next step, the step we are currently taking, is the incorporation of artificial intelligence driven software design.

Anyone who doubts this is the future need only look back to the adoption of the combustion engine, to see the principle that guides capitalists to dispense with human labour. Indeed we are almost there. Almost at the point where computers can design software, without human fail safe support, that can take away any responsibility or complicity in driving the world according to the profit motive, by designing the systems that run the systems of production and manufacture.

If human endeavour no longer requires human operation, is it still human endeavour? Is it freedom? Freedom from drudgery? Or is it the ultimate means of disposal? If we are not required to work, what will we become?

Back to the capital equation, someone has to be able to buy the product. Who will buy? How will we buy? We have no money.

Is this where it all falls down and we have to go back to producing our own food, clothing, energy, and health care is a thing of the past? Is this the beginning of the sustainable world? No, because our enslavement to commercial production already and always demands we pay for something. Imagine the world with no goods for sale, no advertising, no corporate production or processing. How do you make a bed? How do you make a fake fur lined parka, or a baby’s bottle, or make a heater, or a solar system?

So what if governments guarantee an income to citizens, the universal basic income? Is this where the corporations begin to mine governments for our taxes? No. Who pays the taxes to mine, if no one is required or able to work? Every proposal for UBI, funds it by discontinuing programs to support individual and family hardships. Ultimately the tax comes from two sources, private and business. Here in Australia, we still haven’t got past using promises to reduce company tax as election fodder. We are not nearly mature enough as a civilisation, to have real conversations about tax as a tool for engineering the future of our society. We are not sophisticated enough to socialise production and finance and tax.

So how can this system work? If governments do not provide and we have no work and we cannot pay for the goods processed and produced for profit? Those processors and producers will cease to process and produce, victims of their own profiteering. While that seems a deliciousness too good to hope for, the death of greed, end of the shark oil salesmen; aside pointed out above, unless production is socialised we would be without beds and rice, without beds and rice and trains.

It’s no good saying there’s a line in automation beyond which no one will further automate. That’s simply not how capitalism works. Capitalism is essentially rooted in market competition and the profit motive and any company that fails to compete will die. But there must be some point at which the realisation becomes general knowledge that if we continue down this track no one gets their bikkies. What will we do then, and like every other realisation that humankind ever collectively came to, will we not realise until it is too late?

Tags: Tolpuddle, unions
Oils were Oils in ’84 – PREVIEWPrev
The John James Newsletter  253Next